and it's time for knitting! My daughter complained about icicle toes, so she's first out this year. 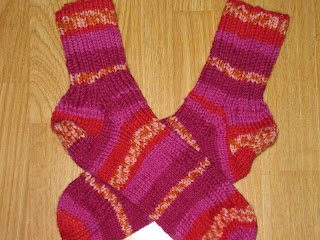 I don't knit patterns, the yarn is simply like that. It's 70 % wool and can be machine washed on 40 d C. It took me a bit of effort remembering the measures and the how to do it, because it's been half a year since I last knitted and we were at the cabin and I had no recipes or instruction books or even a pair of finished socks to look at.  But eventually the routine was back and boy! do I have a busy few weeks ahead.  I have at least 3 more pairs to do

I don't know if I've gotten into the Xmas spirit, yet, but I do have some Xmassy things planned. 1.) Tomorrow my sister in law and the kids are coming, we're making soap. 2.)My kid sister is coming one of these days for cookie baking chitter-chatter day. We've decided on 3 types of cookies. (Stunt-translated recipes and picture proofs are coming later) 3.) I'm knitting socks(it so! counts for Xmassy in this instance!)
4.) I have thought about buying candlelight mass for making scented/coloured candlelights. Yes...busy few weeks. I've also thought - barely - on cleaning and getting the house ready for the Jakobsen clan invasion for Xmas dinner. I have a huge moose roast - pure meat, yum! Just need to inspire the boys to go shoot me a deer. I want venison as well as moose roasting the 24th of December!

Speaking of deers, I saw two cute and confused roe deers on the road uphill to the cabin, this weekend. They roamed about in the road a bit, before getting to their senses enough to jump out and up into the woods. I had full headlights on, on purpose...I stop the car and just watch them, I may put a scare in them, but that's a good thing, they OUGT to be scared of running in the middle of the damned road <_< .They are beautiful creatures, though. It never stops amazing me, how they manage to control those long thin limbs of theirs. they look like fragile stilts and I half expect one to stumble every time I see them.

Speaking of animals and critters in general and rodents in particular. Our hall and kitchen sink at the cabin (yes, it's situated in the hallway and yes, I do the dishes there, because dad was the plumber and responsible for having a kitchen without water or sink. (He takes the most incredible shortcuts when it comes to carpentry and house repairs). The mice had found the dog pellets and chewed through the pack. The dog food was stacked in various places through out the entire hallway. In the kitchen sink drawers(it had made a nest in the rag-drawer), in closets, boxes and in one of hubby's work-boots *shudders* As there were 3 dead mice stuck inside the empty bottles we'd stored in the hallway closet, I'd say they were poisoned by the lethal smell and foulness of those boots! Toasted toads! *double-shudders*

...The dogfood is now replaced with mouse traps and the hallway and sink has been scrubbed. I'll probably die a little inside, every time I see that damn sink for as long as it is there. Thank goodness we plan on re-doing our kitchen, the water pipes,etc!

On the drama front...it's been fairly quiet. My mother wanted to take back the farm and make me loose my inheritance the other day. She later made my kid sister apologize for her and demanded hugs and kisses the next time I stopped by her house. (believe me, this is not such a big deal around her, she's a character)  My daughter has a cold, is feeling extremely sorry for herself and wants to talk about her traumatic relationship to hubby and die, alternately...there's a long list and basically I think she's pretty stuffed, tired and anxious about her exams starting next week, she just needs to let out some steam.

On the health front; my father has internal bleeding, they suspects colon cancer. He's getting it checked. My sister in law who had cancerous lumps() in her breasts two years ago, has had to have both breasts removed due to new cancerous lumps. They're checking her glands and she'll get the results in 3-4 weeks, if the glands are healthy, then she stands a good chance of a complete recovery. We're praying.
I got some new medicine to test out for my psoriasis and I've got an appointment for a brain scan in January.
Peace out!