Did you know pups could get UTI? I didn't either...

Life with Marianne is busy. She's obviously the kind of pup that thrives on getting into trouble. She's managed to escape the fenced garden a few times, already. Thankfully we've been able to catch her before she harmed herself. She is fearless and brave and my kind of gal, but oh boy! she is a handful.

The other day the boys decided to take her with them to the boat. She had already had a first meeting with water when we took them to the lake to let Georg cool off with a bath. We watched her as she got that certain gleam in her eyes when Georg was sitting down in the water close to the shore. Obviously she planned on jumping him from behind in a surprise attack - her favorite thing to do - then got a huge surprise when she noticed that she was submerged in water up to her shoulders. She gave us that look that said: "I blame you for this you asshats!" while hurrying back to shore. We thought this would teach her a lesson about water. We were wrong. 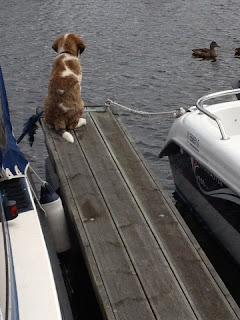 She sat watching ducks from the pier, looking cute enough for Runar to take a picture of her. Then she suddenly jumped. She went under and both Runar and Simen were starting to throw off shoes and clothes to jump in and save her. She came up and started swimming towards the boat and the pier and Simen was able to reach down and grab her. 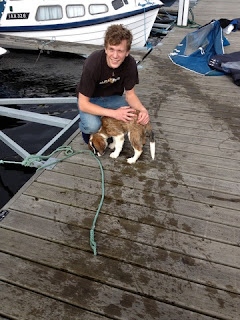 She looked wet and unhappy. For a minute and a half. And she was back in action. She tried to jump into the boat herself. She almost managed. She was left hanging from her front paws, while kicking wildly with her hind legs to avoid falling into the water again. The boys were able to save her in time. She fell half way off the pier once more, because she thought she could walk on air... 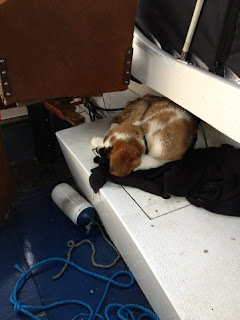 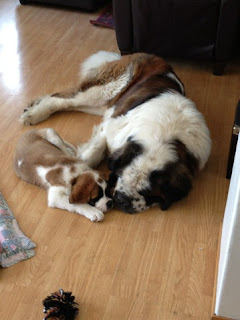 She crawled up on a shelf and slept the entire boat ride and when they got home she sought comfort cuddling close to Georg.


Yesterday we noticed that she was acting a bit odd. She kept acting like she wanted to do business, but nothing happened - or so we thought. I followed her around a bit and recognized the signs. The poor little baby had UTI. We called the vet's emergency number and talked to our vet. She informed us that we COULD bring her to the clinic, but that it would cost us 2 500 NOK (422 US Dollars!) just to show up and then the price for checking her would be 3 times the daytime price and then the meds, because she told us that she did have meds for UTI at the clinic - would also be 3 times the ordinary price. She then told us that even though it was uncomfortable for her it was in no way dangerous and that we could just as well wait until ordinary office hours the next day, bring a urine sample and the pup to the clinic then. Seriously, how on earth are these bloodsucking self-important peeps allowed to do this?!? I bet it is like this all over the world. Why do we put up with it?!?

We called the kennel mom and checked with her and she said the same. To just wait and to use a ladle for the urine sample. That was very good advice, using the ladle. I just stalked her from before she woke up this morning, till she went outside to pee, snuck the ladle between her legs and voila!, Urine sample taken care of.

I woke up Simen to get him to help me hold Marianne in the car - I didn't want pee all over the place and she is still small enough to crawl out of the doggie-prison in the back. I gave the sample to the girl at the front desk and she just looked at me and asked:

"..and what do you expect me to do with that!?!" Pointing an offended well manicured index finger at the jar with the sample.

I was a bit taken aback, but swallowed and answered politely that we had talked with Aud(our vet) on the phone last night and we were told to bring the sample and the dog as soon as the clinic opened this morning as our young pup had UTI. The young bratty girl replied:

I told her that of course I was going to pay the fee and paid her, whereupon she replied:

" Well, Aud will look at it when she gets here at 10, because she starts late today."

I asked her why on earth we were told to be here at 8 and to bring the pup with us, if nothing was going to happen until 10, but she just shrugged and I had to leave before strangling her, because there is nothing that gets my temper up like a pouty teenage girl twirling her hair and looking at me like I was dirt under her manicured nails... 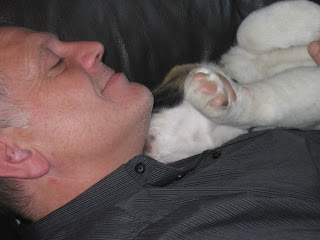