...had the feeling that something went suspiciously well? A  little too easy? The feeling of disastrous accidents and bad luck waiting to catch up with you, still out of sight, but there all the same, lurking, waiting?
That is my feeling after yesterday's meeting with my caseworkers.

It went well. They were nice and polite and my 'old' caseworker informed my 'new' caseworker of the situation and the history of my case while we waited for my doctor to get there.
When my doctor arrived we got down to business of discussing my health, the development of it and results of various tests.  My doctor told them that my pain and inflammations were real and that the pain I was living with every day was severe. She told them that I had declined the offer of strong pain medicine and neither did I use sleeping pills. She said that she had never felt I was particularly depressed or had any mental issues that she had noticed. Usually when I did go see her, my inflammations were raging and my fever so high I had difficulties communicating properly. She said it was her firm opinion that I was unfit to work and that 4 years of keeping on trying to after I had to quit my office job ought to be enough to show that it wasn't for a lack of effort on my part, but for a lack of health.

The caseworkers concluded the meeting with the decision that they would await my doctor's written report, where they asked her to specifically point out the things she mentioned during the meeting and that they'll use this to re-apply the central authorities for full work disablement. My new caseworker will call me in for a new meeting when my application has been viewed and decided upon.

It was so completely different from the last meeting with them, that I was left with a surreal feeling when I walked out of there. I have absolutely no idea what has happened between September last year and now, but something must have, or I have utterly lost grasp of reality altogether.

I should just be happy and relieved, I know. It's just that...I don't know...I think this explains it: 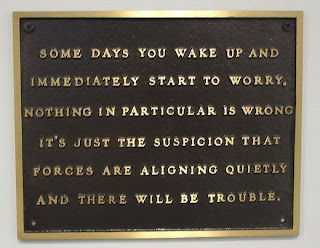