...but there are things I need to work on. I need to start taking better care of myself. No, I don't mean dieting to lose weight, have implants, or cosmetic surgery and all that nonsense. I mean eating better to make sure I am still around at 60, or 70, or even 80. I owe it to myself, my husband and my children. And you have to be realistic about these things, right?

1) Quit smoking
I am at a bit of a loss as what to do with myself to enable me to actually quit and not just cut down, quit for a week and start up again. I seem to be stuck in an endless stupid circle of quitting and giving up. I realize I am as pathetic as it gets. It's become an annual farce; Cara's quitting smoking. Again. Followed by lots of snickering and eye-rolling.

Last year I bought E-cigarettes. Chinese. They were crap. I now know that there are much better ones out there, to a much better price too, but being realistic about it, they won't do me much good. I have to get over myself and up and quit. Period.

2) Eat better
Seeing how I suck at quitting smoking, how the heck am I going to lose weight if I get big?. Best to start watching out before that happens. And it will happen, at least to a certain extent. Hulloo! I'm mortal. I'm female. I've had 2 kids and I'm over 40. Duh! Also, genes. 'nuff said.

The reason I don't want to get big, isn't so much vanity, although it is that too. It's a fear of what the added weight will do to my arthritis. If the arthritis, the fibro and the psoriasis gets a lot worse, I'll end up the crippled wreck I've been told I'd be today if I hadn't kept fit. I can't fix my health, that train has left. All I can do, is slow the progress and I have to start now. I can no longer say I'll worry about that when I get old. I sort of am old, already...ugh!

3) Get outdoors more
I'm already going on walks at least 5 times a week and going for hikes in the woods once a week, or so (I go hiking more often during the summer months, but I don't go hiking at all when snow and ice rule my neck of the woods).

I need to aim for walks 7 days a week. I need to aim for going hiking in the woods at least 2 times a week. I'm contemplating photography as a new hobby. I suck at taking pictures, but I enjoy it and if I get into it, it'll help motivate me to get out into the woods more.

I've started on the going for daily walks, which doesn't really count as starting on any resolutions, because, you know, I go for walks, it's what I do.  But taking into account the state of the roads up here, yesterday, it was a huge feat and should count as a regular work-out thing. Actually I didn't go for a walk. Georg and I slip-slided along on our short route. I have several routes, the short one takes about 45 minutes and the looong one takes about 1.5 hours. This last week, the weathergods have been having their winter solstice heavy duty partying. Temps have been crazy. They've tipped from 5 degrees above zero, to 5 degrees below. In between it's been raining, snowing and sleeting. Results: wet, icy roads and frozen icy snow on everything else that aren't roads.

Georg being Georg and New Year's Eve having just happened, he needs a lot of encouragement just getting him out of the driveway. It's hilarious, such a big dog being so nervous and scared of everything. Well, we got going - I mean sliding and things were okay. I had forgotten to put on the crampons, but figured I'd be fine. We got to the part where I normally let Georg off the leash as it's a part of our route that goes down a forest hill.  There are no houses and the only people I meet are other dog owners. It's a pretty steep road. I let him go and after two steps I lost control, started sliding downhill and fell sprawling all over the road. I might have been hollering.  When I finally stopped sliding, and looked up, Georg was still standing rigid in the place where I took off the leash on top of the hill. His whole body language said; Danger! I'm not going down there. Actually, I'm not moving.

He didn't. In the end I had to crawl on my hands and knees, in the icy snow in the ditch back up to him, leash him and pull him until he started sliding too, at which point, he couldn't do anything but follow, so he decided that, alright, I'll move, but I won't like it! He kept giving me these looks that if they could have killed, I'd have been dead many times over.

We got down the hill and we got back home - no broken limbs - but hells bells, slip-sliding instead of walking is hard work. It took us more than an hour to get home. Georg was drooling  so bad he left trails of drool behind and  wheezing. Boy, he was wheezing like a cigar-smoking, whiskey-drinking blues artist in his late 80s by the time we got home. I wasn't much better off, just that I wasn't drooling... 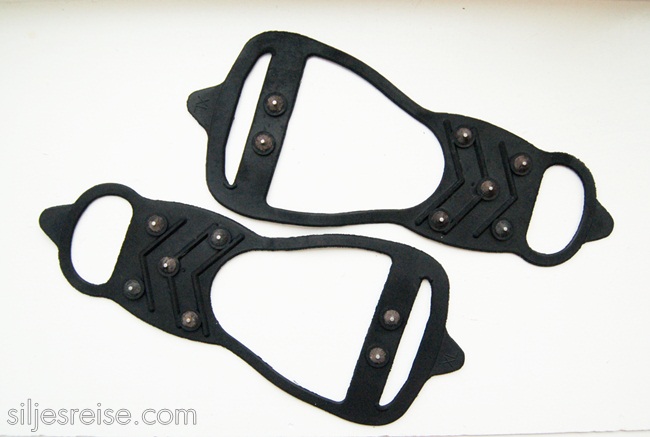 No more walking without crampons. I need new ones. I have these types>>>
Just that all the studs have gone on one pair and only a few remains on the other. Still, one partially studded crampon is waaay better than none. Lesson learned.