Dear Cat (not a love letter)

you are not welcome here, anymore.

PS! Marianne sends a teary Q from the hall; WHY? 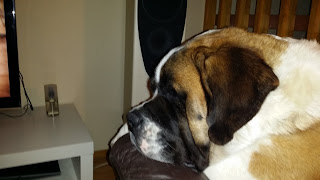 
In other news, I've spent the weekend doing yard work and mowing lawns. I've also driven tractor a lot. A Lamborghini.(I just had to say it) If you look at the photo, you can see the infamous Lamborghini.  Driving it, or using the tools is quite a work out, I tell ya! We got all the equipment for the tractors, etc stored away in a semi-tidy manner, mowed the lawn and fields, and just got things sorted. Then the red tractor (the 1969 Massey Fergerson) died. In the middle of the driveway. At the most unsuitable place. Litterally between a rock and a rock with no room on either sides. I had to use the Lamborghini and push the hoe to the side enough for another vehicle to pass.


Nature-wise, there's a Houdini lamb that's settled in our fields/lawn. Today, After having watched it from the steps and hallway for 2 hours and after it stomped at her when she walked past to go pee. Marianne, couldn't resist and ran it off. I was watching and caught her. She stopped and came back to the door. Funny thing is, she doesn't bark.

The lamb has been escaping enclosures and jumping fences since mid summer, it's not even scared of the dogs. It doesn't really panic and run, it sort of jogs while baahh-ing a muffled mmmhhhumm still chewing. When Marianne stops, it stops. And continues eating.

I'm fairly ok with it living there as it doesn't eat the flowers, but it shits everywhere...my life is full of shit? 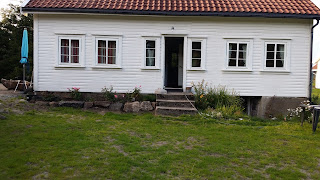 PS! I just became the new owner of an old(2001) Toyota RAV4 2.0 Haven't seen it yet as Runar is driving it home now. It being way late, I'll be asleep before he gets here. I don't know anything about these cars, but I don't care.  Life suddenly became much easier, freer and better. . and I'm off to bed.

PPS! What's going on in your lives, peeps, you've been quiet for too long...or was it me who was hiding? Anywho, what's happening in your neck of the woods? 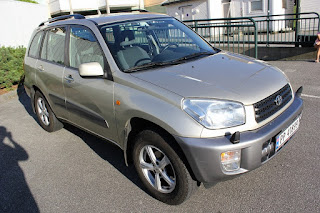 Link (don't know for how long it will be up though.
sale ad for the car with lots of pics