Is doing a lot better. He's become a proper member of the family and I think we've all decided that he's here to stay regardless of what the Vets say about his health and prognosis. We still haven't heard a word, but according to his former owner, the bill needs to be paid in full before they will tell us anything and the bill is sent to his ex girlfriend...yeah...interesting.

He is full of puppy energy, wanting to play and fool around whenever there are somebody willing. He jumps about in joy when we start our daily walks. He races around the garden like a camel, yes, I said C.A.M.E.L.  I kid you not, have you seen a 70 something kg St Bernhard puppy run? picture a camel body with a puppy brain. Eloquent is not a word that comes to mind... But he is adorable in all his drooling puppy happiness.

We're now quite convinced that, in no way, did he get the proper care at his former home. He needs lots and lots of love and attention.Our cure with plenty attention, play and small frequent walks seem to pay off. He's hardly limping at all these days and he seems to be getting stronger and happier each day. He is hungry and digs into his food. He was quite the spoiled brat food-wise when he first arrived. I don't believe in buying a lot of expensive dog-snack in order to get your dog to eat. I've always figured that if the dog gets enough attention, care and play and the food is nutritious and correct for their build, age, etc, then the appetite won't be an issue - so far it seems I'm right. I haven't checked his weight, so I guess I can't really be sure...although, judging by his looks and behavior, he's doing quite alright.

There are still issues we need to work on, by all means. Things aren't all peace of cake. His fright of riding in cars, for instance. Last Friday we took the dogs up to the farm. I left early, but without the dogs, because there is no way I can get 70 kg unwilling dog into the back of a Volvo on my own. I didn't even want to try. Runar had to get his youngest brother to help him. I so wished I could have been there to watch those two wrestle Georg into that Volvo. According to Runar it must have been highly entertaining for the neighbours. After countless tries, they ended up with Runar dragging Georg to the car, then giving the leash to Thomas, who was positioned in the back seat of the car, who then held on for dear life, while Runar lifted up first the front paws, then pushed the back part the rest of the way in.

Georg, then settled down quite calmly and slept the entire ride. When he jumped out of the car up at the farm, he greeted me with nonchalant dignity and was his happy usual self.

He absolutely luuuubed being up there and running free in the fields. He completely melted Runar's heart when he lay down next to Laika and kept a careful watch towards the woods, while Laika slept They were allowed to stay outside on their own for a bit after dark.They didn't roam, but stayed close to the front steps taking turns keeping watch while the other slept.

When we were leaving the next day, he came willingly enough to the car, but wanted help into the car, so we're getting there. Just need to let time and repetition do our work here...I'm hoping to get him to at least put his front paws up on h is own making it easier for one person to help the rest of him all the way inside.

The only sad part in all of this, is that Laika, poor thing, isn't doing so well these days. Runar took them for a long walk on Sunday in the gale and the rain. Her arthritis acted up badly. She's hurting badly in her hip and one leg. She's on rest and sleep only treatment. She's very brave and tries to do her usual things without complaining. It is heartbreaking to watch. I'm giving her anti-inflammatory pain relievers. I know she'll get well again in a few, but it feels a bit like we've failed her

I'm keeping her downstairs today, so that Georg won't bother her if he gets bored. Georg doesn't go down the stairs, only up...He doesn't really have any problems walking down stairs as he's done it outdoors, but I don't plan on forcing him to walk down the staircase and don't mind him thinking it is impossible to walk downstairs indoor. Easier to avoid him getting himself into trouble that way. He's still a pup and I don't want him accidentally eating or chewing stuff that isn't puppy-safe

here's the two of them napping on their new gym mattress. 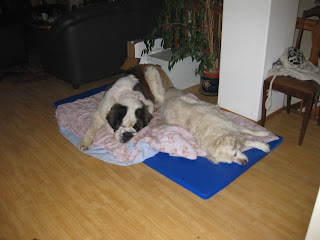 Laika takes up most of the space. I bet she thinks it's a lady's privilege and that's fine by Georg. He adores the ground she walks on =)