Poor Georg. He's got some kind of fungus(fungi?) infection in his ears. 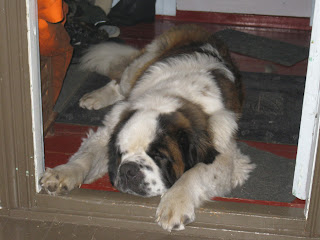 His ears were so swollen and the inflammation was so bad he needs to be treated for both the inflammation and the fungus for 2 weeks, before we're going back to the Vet to get his ears properly checked with the use of mini camera, etc. It is quite possible that his issues with the runny nose (more than normal, I'm talking thick gooey GREEN snot here) is a sinus/ear infection issue.

We've noticed that his hearing has gotten worse. The former owner and also the former vet told me that he had a lot of ear wax that affected his hearing and told me to continue treating him with ear drops and just regular cleaning of his ears with a soft cloth, which I have done. In my opinion his condition only got worse, so I called my ordinary vet and asked for help. I'm glad I did!  I am so relieved I switched veterinary to our well known and highly qualified ones  that we've used for all our dogs.  Now I know he'll get the correct diagnosis and the correct medicines.

He started on the meds yesterday, but when Vera came over to play, Georg was the one with the most energy. We've rarely seen him this hyper-happy and energetic. I wonder if it is the cortisone pills starting to reduce the swelling, opening up his ears a bit. I am at least imagining his head must be feeling lighter and better, because  I know how awful I feel when having sinus- and ear infections =/ 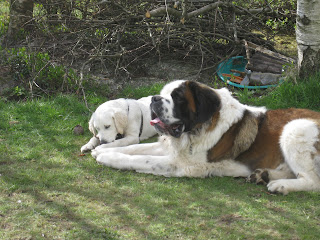 Otherwise Georg charmed the hell out of everyone working there. His weight was fine, he was well muscled and fit, his coat was exceptionally shiny and healthy. His temper was wonderful and he had a calming effect on other dogs(I've met the vet and her two Wirehaired Pointers on our walks), he should be used as a therapy dog, blah blah yaddi yaddi ya. It's always nice to hear good things about your pet, but I think it is in their job description to brag about their customers dogs ;-)

He did well, considering how much he dislikes going to the Vet. I got him onto the weight too - I had to step up on it and make him come up with me, but he got up there. He agreed to letting us fumble and fimble and look into his ears with the minicam, which - according to the vet - shows just how kindhearted he is and that he trusts me completely. (I knew that, but it's always nice to hear it out loud). He OW'ed out loudly once, poor thing, but stayed calm and let the vet finish.

In two weeks, we're going back and he'll be heavily sedated for a thorough check to make sure his hearing isn't permanently damaged and to check if he needs antibiotics

Georg's been real uppity and feisty after the Vet appointment. This bodes well for the future. Hubby is very relieved his 'boy' may grow some balls yet :P