Vacating in Denmark is not bad. The bed mattresses are ROCK hard.

Even with a great effort at trying to stay up late in order to get the most out of it, I keel over at around 11pm. By 11:30 Cara the body drags me off to bed by my eyes. The eye lashes are pulling me towards it by using the structure of the carpet. Blink by blink. All because I have to move and/or turn every 1.5 hours or so, or I'll ache too much to sleep and by 8:30am the next morning, I have to get up no matter how much I try to sleep in just a bit more. Vacating can be such hard work, I tell yah! :P

Other than rock hard beds and fighting general tiredness, I'm enjoying myself immensely. I just saw a beautiful rainbow. Sickening, isn't it?!?  I've got nothing to tell you that isn't dead boring, so I'm going to give you some of the stuff I rambled on about during the summer while up at Vintland.

This is what I wish would have happened.

This is sometime during the summer when I noticed that some of my favorite authors were attending book festivals in the UK and I started pondering on how to get there and what excuses to use, so that I could possible spend that much money. There wasn't any book festivals with all of these gathered, or at least none that I know of, but this was before I had checked them out, while the possibility seeds were sown...

I'm in one line to get my King of Thorns signed by Mark Lawrence and Helene is in another to get Red Country signed by Joe Abercrombie. I'm already holding the copy of Blinding Knife by Brent Weeks in my arms, my arms wrapped around it like the treasure it truly is. (or will be – I might be fast forwarding that statement to Oxtober sometime after I've actually read it). And while I'm standing there waiting for the person ahead of me to disappear, so that it can be my turn, I hear someone calling my name and Helene's annoyed voice; “Mom!” I look up and Joe abercrombie's voice: “You really from Norway and chose this festival for your first Mother/daughter trip abroad?” And I reply: “Yes.” and he invites us to join him for dinner together with a bunch of other authors and Mark Lawrence takes time to write me a personal greeting and I feel like a queen for a little while.

Then I fast forward to the dinner and China Mieville asks me if it is true and I reply “yes” and he continues: “You drag your daughter to a book festival, forces her to stand in line and dare call it a Mother/daughter trip?!?”

And suddenly I'm hated by everyone and immediately wins “Worst mom of the year” prize. I naturally start pouring down wine, get wasted and behave obnoxiously and when some stranger, who incidentally stays at my hotel, loudly declares he's taking his leave, Joe Abercrombie says that's my ride, that I should ride with him to the hotel and let my daughter have at least some fun. The stranger naturally turns out to be a sociopath who, when I refuse to have sex with him, throws me out of the car in the middle of a destitute, creepy industrial area.

I get robbed by a bunch of TV-babies and threatened at gunpoint and then get rescued by another non-sociopath stranger, who brings me to my hotel, whereupon I freak out and have a miniature breakdown in the lobby, because even if I can act tough when I need to, I always go down like a house of cards afterward, when I know I'm safe – and someone sees it and then everybody knows, even Runar, and then he'll realize that all his fears about me being naive and completely at risk when on my own, and he'll never let me out of the house, ever again, which, you know, will really suck. And I go 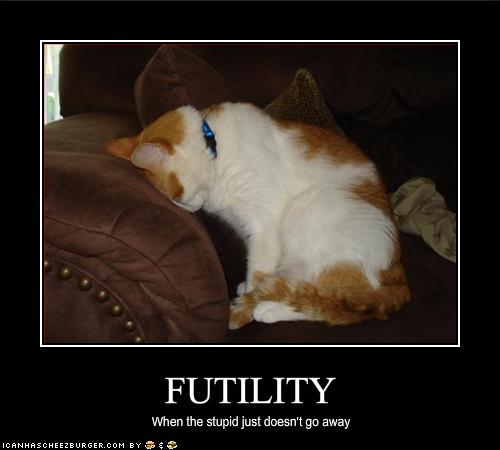 And I realize that perhaps, when it comes down to it, it is a good thing that some of my dreams don't come true.


...did I just explain luck in practice as well?