The meds is still working well. I've been able to knit a lot lately. Scott's socks are done. Simen's jumper is about half done. The worst part(read most boring part) is done, I'm about to start on the arms.

I'll be starting on your socks, now, Jason. I need to know, if you talk to Ash, or have her read this. Would it be alright to knit Ash' and Emily's in a multicolour yarn this colour mix? (I edited the picture - it's more like this mix)  I have enough to make one lady and one children's sized. I'll also need their shoe size.

I haven't started on Helene's Yoda hat, because I only have a picture of the one I want, but no pattern. I know, why didn't I download and/or save the pattern along with the picture? Because I'm stupid, that's why. I have no other explanation. I do have a cunning plan, though. My friend, Ellen is a knitting wizard. I'll show her the picture and with her help, I'll make up a pattern. I'm invited to eat a traditional Norwegian dinner dish Description wiki link on Monday. If you read this, I'll try to have it done before Christmas, Helene, alright?!?

Moose hunting season has started. Tomorrow is our first chase. Hopefully there are a few moose hiding in the woods up there. Word is that the number of moose is getting lower, while the number of big Red Deer is getting larger. We're allowed to hunt the Big Red, but they're hard to get and we're only allowed two of them. Not much meet for a big hunting team. To be honest I haven't spotted a single moose all summer. I've seen roe deer aplenty, but only moose droppings, not the actual animal. Crossing fingers the hunt will go well and that it'll be as little eventful as possible. Eventful usually means something bad in my experience.

Georg will come along. The little sick pup has grown into a fit big boy. He's still as gentle as can be, but he is no longer quite such a pushover as he used to be. He is also a whole lot happier than he was when we got him. Yay for Georg!

We're temporarily broke. My tax refund still hasn't been paid. Annoying as heck, but there's nothing I can do. The authorities final due date for paying them is the 25th this month and it looks like I'm among the last people to get their refund money. We had to take up a short term(read fucking unbelievably expensive) loan in order to make it to the next paycheck. In the long run, the loan doesn't matter as I'll pay it off as soon as I get the refund money, but it is still annoying having to do it, when I know I shouldn't really have had to do it...

Simen has been working extra after school at Runar's work a lot this fall. That boy has more money than I do, that's for sure. He's lucky, because he not only gets good money for his work, he gets experience that will look very nice on his CV for future use when he's out looking for a regular job after studies are done. As long as his working doesn't interfere with his school work, I'm not going to stop him. He's young and fit. It took him a few times to learn to pack a proper double lunch pack for the days he's going straight from school to work, but that's how us stubborn mules learn - by sorely learned experience.

My kid sister has a job. I hope she is able to keep this one.

My oldest sister is in New Mexico for 3 weeks. She's helping out with her Grandson Alexander while Melina is at the hospital giving birth to twins! I knooow, we're all very excited. Nora called me in a state of panic the day before she left. They've done a lot of remodeling on their 18-hundred-something-house and the plumbing and electricity has been modernized, etc. It's turning into a dream-mansion. Alec my BIL lives and works in Perth, Australia, so the house will be empty, while Nora is gone.

The evening before she left, she noticed a nasty stink in part of her house - she said it was like sewage or a rotting animal @_@ Fun....NOT. It seems she's revised her view on Runar and I, because I was the one she called for help. We'll be checking it out this weekend. Hopefully it's something easily fixed. If not, we'll have to call someone to take care of it. Either way, I told her I'd take care of it... funny when you stop being an eternal child and kid sister and becomes a grown up to be reckoned with. I'm not sure if I'll ever stop viewing Hildegunn as anything but a child...

My parents are not doing so well, these days. Dad is getting old. It's sad to watch. He still tries so hard to be fit and active, but his vision is blurry and he gets dizzy spells that makes it difficult for him to get around much. My mother decided she was old a few years ago and acts and looks 5 years older than dad, even though she's 6 years younger. No surprises there, tho, she is who she is... He's determined to help me divide and prepare the meat from the moose hunt. I'll be doing most of the work, but it's good for him to feel needed and helpful. Even though we both know it, he appreciates that I still seek his advice, etc. We get to talk while we work. It's nice. It's how we've always done - working together and chatting while we work.

Update 2
These are pictures of the type of Yoda hat I want. Not very complicated to knit and no need for felting, etc. 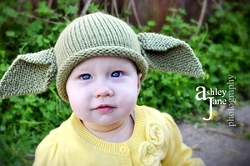 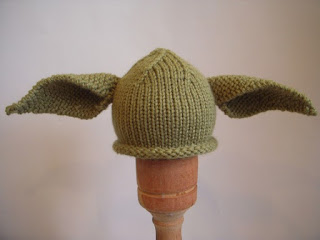