I know for some of you, November is a good month with Thanksgiving, family, good food and friends. Up here, November is one of those months that just seem long, dark, cold and wet. Temps are around 0-10 C (32-50F) I hear ya mumbling about those temps not being so bad, but near the coast 36F rain and wind makes for truly lousy weather. The occasional snow day will happen, but it'll be the wet kind of snow that turns to sleet and rain, before it drops below freezing during nights and then thaws back to slush and more rain the next morning. 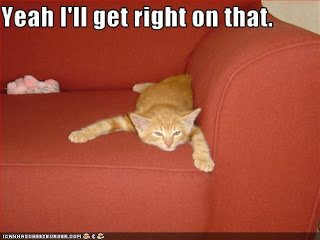 It's hard to fight winter depression when the days don't get proper daylight. Everything gets a grayish-brown hue and becomes cold and ...soggy. I should have tidied up the garden and the summer pots, already. I should rake the last layer of leaves off my lawn. Hasn't happened yet. My excuse is that I'm waiting for a somewhat sunny day, but pfft, yeah! As if!

Some things have been done. We've ordered a new veranda door. that will save a lot of heat this winter. We've gotten the birch tree that I'm going to use as Christmas santa decorations next month, cut and moved indoor to dry up. Next weekend we'll be cutting the 'stands' and the branches which will be the body for my 'Stubbe-nisser' (translates poorly as Root-santas)...I can't explain, but will show pictures of them another time.

Hubby and I fixed the shower leakage and the jacuzzi last week. I had my first bubble-bath the other night. Bliss! See, that's what you need to do in November. You have to make room for nice stuff. A good book, crackling fireplace,  a good movie - preferably a good FUN movie.

Yesterday I watched The Avengers with Simen. It was a blast. One of our favorite moments were when Hulk punched Thor. For no good reason. There were other golden moments as well, like when Hulk called Loke "Puny God!"

Hubby hates these types of films. He's never been a fan of the comic books either, poor guy, doesn't know what he's missed out on :P It annoys him to no end that the kids enjoy 'my' kind of movies.

As a demonstration to our "lameasshumour" he called his brother over and watched Fat Pizza - the movie
Think Ali G and Borat, but in Australian and you get the gist. I've watched it and I laughed, it's got its fun parts, by all means, but...yeah, I guess the whole boobies-popping-out-all-over-the-screen has grown a bit old for me.

So, while hubby and his brother howled and groaned, I tried ignoring them by listening to Jim Butcher's Harry Dresden going at it on audiobook, but I gave up and instead just watched the two of them laughing themselves silly. Seeing how L.O.U.D. They get in how they express their joy over a movie scene, it makes sense they never go to the movie theaters. None of the other movie goers would be able to enjoy the film if these two were there...  By the time the film ended they were completely worn out. For them, watching a movie, is more like a thorough workout, than anything else. They curl up in fetal positions and whimper. when the characters get their a$$es kicked - and let me tell you, there is a lot of that going on in this film - they literally fall off the couch laughing. They hide behind pillows screaming "NOOO!" of the top of their lungs... It's entertainment enough just to watch them watching.

Tonight I'll be going over to my friend, Ellen to knit and chat. I've reached the shoulder and neck part on the jumper I'm knitting Simen and it's the 'complicated part' of the jumper. I'll need Ellen to go through things with me once more before I go at it... Perhaps I'll be making some scented candles later this week. November is perfect for candle lights.

From what I've been reading on your blogs, it seems there are a lot of stupid stuff and drama is going on. I hope you're able to find some small moments of peace, fun and happiness in between. Hang in there and if you can, laugh in the face of shiteness, "Hah, Puny Shite!" *hugses*