The Christmas work shop went well. More people than expected showed up, which was fun, but it also meant I was too busy to take any pictures once the people started coming. 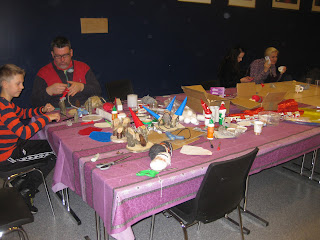 Friday was a long day. I had spent the night at my oldest sister's house. We had baked cookies and home made caramel pudding the night before. Woke up early and got ready to attend a funeral.

My childhood friend, Nina, lost her father the weekend before. He had some health issues, but they don't really know what he died from. An autopsy was made and they're hoping for some answers to show up eventually. It was one of the toughest funerals I've attended. He was only 67 and a great man and a wonderful dad and grandfather. I've always had a special relationship with Nina. They were 5 girls, just like us. The daily drama going on in their house were at least as bad as in our house. Her mother was also as crazy as mine, just younger. It meant we could share stuff that we had to be careful of sharing with others, because they lived in so very different types of families. She's oldest and she was a daddy's girl, all the way, like me. She was and is absolutely wrecked by this and my heart bleeds tears for her.

In the afternoon I went back to my sister's house and we made birch santas and Turid and G. Nora made Christmas pudding. I video'ed them while they worked. Aslaug was just sitting eating cookies and chillin'

Since I had already promised you pictures of how to make the birch santas in a previous post, I had to do another work shop at home, so I invited my sister to come over to make some.
Some are singing, some just smile and admire their cone-Christmas-tree. 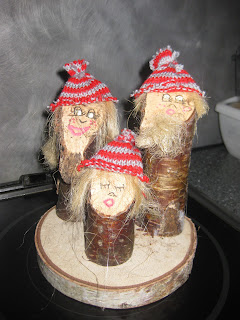 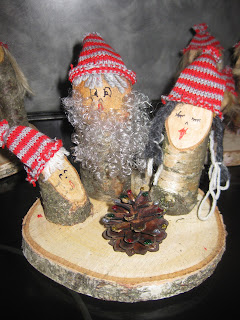 I had a ruined candlelight that made a cute little extra art deco for one of the santa groups.

When I make them with young kids, I always try to make them draw and decorate their santas as they wish. I mean, who cares if they're not picture perfect. That's not the point. The point is to have something the kids have made all on their own. One of the kids at the work shop this weekend, made her female santas have fangs. I commented that they must really be hungry for their Christmas porridge. She nodded and replied; "Oh, they are. They haven't eaten in a whole year!"

You'll notice that my family's tradition with wild game as Christmas dinner, isn't the norm, it's just something that comes from my father's side of the family, because they were all hunters. Also, because being a big family of 5 kids and only dad's income, it was a whole lot cheaper. 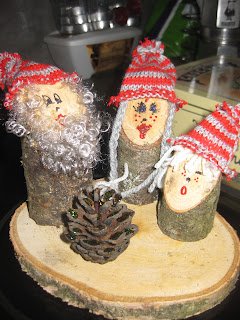 These days we do it, because we all love  moose roast and venison so much :p