Another week and weekend closer to spring. Huzzah!

Simen got his front teeth bashed in Friday night. It wasn't a fight. He was at a party with friends. There were dancing. There were flailing of arms. There were fists in contact with teeth.

It would probably not have ended the evening's fun for him, if he hadn't just removed his braces. Braces are there to forcibly move teeth into their correct position. Result; teeth loosen. It takes a while after the removal of braces for the teeth to settle again.

We are optimistic he'll keep his teeth. They hurt like a son-of-a-bitch, which is a good thing, as it shows the teeth nerves' are still alive. He's using the plastic after treatment thingies that keep teeth in the right place, only taking them out when eating. He's living on pasta, soft bread and jell-o for now. 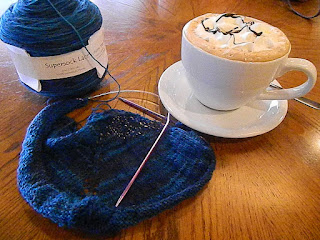 I spent a day in town with my friend, Ellen, yesterday. There was a snow storm going on, but it did not matter. We visited craft's stores and ate lunch at a restaurant that is almost like a hidden gem of a place. It's the kind of place that is always full of people, even though it's not in the center of town. Prices are quite alright and the food is home made with love and passion. If suffering from winter depression, I recommend a day in town with a good friend. Rounded off with a great lunch, it's better than drugs. It'll get you through another week of chaos and bad weather and what-not. Toasted toad's truth!

Ellen told me about her dream for when she retires. She wants to open a knitting café. A craft's store also selling coffee and simple lunch dishes. I hope she turns her dream into reality. She's the kind of person who would be able to pull this off and make it work. I would totally visit that place on a weekly basis. 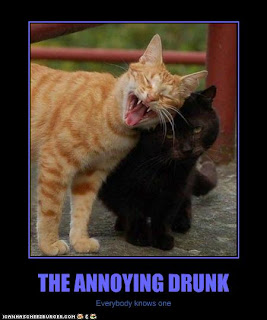 I was supposed to attend hubby's annual (Late-late) Christmas party - as a chauffeur, yesterday.  I was prepared for a loooong evening listening to bad jokes and failed-attempts-at-funnies from drunk workers who either hate your guts, because you're married to their stupid boss-man, or tries to brown-nose you so blatently obvious it leaves you a bad taste in your mouth.

Great was my joy, when hubby told me that I had been invited by his mom to a party with her and her siblings(they are nine) and if I wanted to, I could skip the Christmas party and go with them instead. MIL's one brother owns several properties and co-owns a couple of restaurants/night clubs. One of these places had been ruled bankrupt and he wanted to hold a party drinking up some of the beer that was still left in the place. Highly illegal, of course. All kinds of alarms went off in my book-keeper's mind when I heard, but figured pfft, it wasn't my problem, uncle is old enough to know what he's doing.

It turned out that not all of the nine siblings' kids thought of the legal aspect of holding this party. No. He decided to post an invitation on his fb wall. "Open party at XX's. Free beer for everyone. Let's empty the barrels!"

Naturally the party was canceled. About 15 minutes before it was supposed to have started. Thankfully it was already too late for me to attend the work-related Christmas party.

I got to spend an entire Saturday evening knitting in front of the TV in SOLE CONTROL of the remote. Best. Thing. Happening. Evah. I watched this stupid Sci Fi action movie from A to Z, even though it wasn't particularly good, I enjoyed every little second of it. This only makes sense to those of you who are married or in a long term relationship where the spouse has vetoed the use of the remote control. For the rest, it'll just remain a mystery, so you might as well ignore this entire paragraph. You're welcome.