*Whoosh* - the sound of yet another week flying by 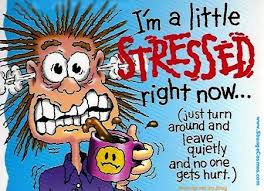 It's been an eventful week.. The kind of week that doesn't abide well with me. The cold temps and then this last week with temps going below and above freezing, rain, sleet and snow alternately is wreaking havoc with my fibro and arthritis. I have to admit that in those periods I don't handle stress very well. Not. At. All.

I followed my mother to the doctor earlier this week. They've reached that age where the line between child and parent remains, but where the roles are swapped.

Turns out they had forgotten to give her the prescription on blood thinners, she was supposed to have started on last year. I also mentioned to her doctor about the pressure she's feeling around her chest when she's doing physical work - like shoveling snow. (They shouldn't be doing these things, but they insist on clearing the steps on their own) She, herself, had completely forgotten to mention this,  because she didn't think it was important. My dad, thankfully, remembered to mention it right before we left the house. The doctor found it important enough to put her up for a thorough check at the hospital.

My dad was hospitalized this week. Atrial fibrillation and liquid in his lungs. He's been put on diuretics, which they hope will remove it, or at least reduce it. He's coming home today.

It's tough to watch them grow older and weaker. Even though I knew this would happen and I've observed grandparents growing old and how our parents had to care for them, I wasn't prepared. I'm not sure you can be fully prepared for these things.

How to offer them help without compromising their integrity and pride. How to suggest necessary steps to ensure their safety without insulting them. How to persuade them to accept that there are things they can no longer do themselves. How to do all this without ending up a slave to all their whims and impulsive ideas. How to avoid getting frustrated and annoyed at them 'nagging' on you all the time.

They don't nag on me all the time, but I still get frustrated and annoyed. I'm just not a good enough person to avoid the groan when the landline rings and I know it's my mom, because my phone number is the only number she remembers and there are only two persons in the whole world who ever calls me on the landline. And no, I don't have the heart to drop the landline, even though it is expensive, because that IS the only number my mother remembers. I'm not THAT bad a person, either, and if there is an emergency she needs to get hold of someone, like when my dad was hospitalized.

There may be permanent nerve damage on Simen's teeth. He's up for further checks next week. For now, he's surviving on soft foodz only. Recipe suggestions are much appreciated.