Just one of those days...

You're all familiar with them there days, aren't you? So am I. I handle them pretty well[Read: cussing and swearing, but without actually killing anyone].

They're just part of life. I understand and accept that. But do they have to come in friggin shoals? I mean...Come on!

After a long period with bad arthritis, which lead to a bad bout of psoriasis, which lead to bad skin and  excessive hair loss, I realized I needed to do something about it. Having no extra money, I knew that going to a hair dresser was out of question, so instead I opted for a box do-it-yourself-hair-bleach/dye and a box of that nutri-something powder that is so popular in diets and switched my breakfast - which I don't really ever eat - with a glass of this wonderstuff. I have to admit it has helped. My skin is a lot better and the hair looks thicker and a lot better. Or, so I thought. Until hubby decided to give me some of his great compliments.

Him:  "Well, you no longer look grey and old."
Me: "Why, thank you, dearest."
Him: "Now you just look old and thin-haired"
Me: "Really!?! I feel so lucky to have a husband who gives such uplifting compliments"
Him: Grinning widely "Yes, yes you ARE lucky..."
Me: Thinking to myself that I can't really do anything about my hair so there's no point thinking about that too much and at least I'm not fat.
Him: "...I give great compliments and you know what, it doesn't matter that you're getting fat, I still love you."
Me: "I. Am. Not. Fat."

Him: "meeh, you're not FAT-fat, but you know, your bum is sagging, there's THIGHS[said with emphasis and with hand movements indicating lifting something truly heavy] and when you sit down and lean forward, your stomach sort of bubbles, you know what I mean."
Me: Speechless
Him: "And it doesn't matter one bit, because I still love you, honey and I still want you, know what I mean, nudge-nudge n'all that" [obnoxious hand-, eye-, eyebrow movements]
Me: "You need to stop talking, or you'll be a wife short in no time."
Him: "You should take longer walks with Georg. That will do you a lot of good. I hear it helps with depressions"
Me: "..."

I usually get up and leave at this point, because when he gets on one of his rolls...yeah.

He's loving his new job. He's enjoying himself and the company of old friends and colleagues. He comes home feeling on top of the world and it's all fine, but when he gets too full of himself, he really is a tough case to handle. It's like there is a weird chemical collusion in his brain and there is no room for anyone but himself. I try to overlook most of it, because, hey, I don't want to be the bitter bitch sitting at home unable to work even a half time job, complaining, but when he gets like this...It really is hard to handle.

I'm aware that I'm struggling with depression and that my mind is lying. I'm taking things up in a worse meaning that what they're meant. I'm sensitive and get easily upset. I'm dealing with insomnia, which scrambles my brains and doubles the other stupid stuff. I am aware of this, but helloo! I wish he wouldn't feel compelled to giving me compliments and good advice.

It's like he notices I'm near the brink of breaking down and gets the urge to pick on me, more like the way you get the urge to pick at a scabbing wound. Unconsciously. Maybe he is trying to push me to tell him what really bothers me, because he complains that I don't tell him about my worries/fears/hurts. It's just that when his advice for how to deal with insomnia, is to go to bed earlier, well... His advice for how to handle housework when my arthritis is bad is to start earlier in the morning and work slowly throughout the whole day, so that I don't have time to sit down and think about how much I ache...well. Yeah, I can sort of do better without.

Depression lies. I know. I'm not sure it changes words, but if I am honest, were I to 'arrest' him on his words, he'll probably say something along the lines: "Yes, I did say those things, but it wasn't what I meant..."

I knitted the hat for my sister in law the other day.  Turns out that the different type of yarn screw up my recipe and I ended up having to knit another one. I'm in the process of felting it. Cross your fingers this one turns out better.

It is something, but it's no hat. My feet fits in it.  I haven't quite figured out what the heck it is, or what I could possibly use it for.

Ideas will be accepted with gratitude. 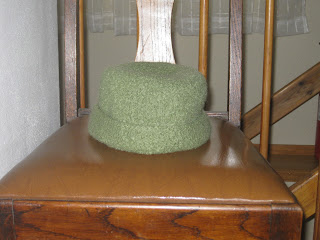 I finished knitting the second attempt at a hat and it turned out a lot better.

I'm contemplating giving her the epic-fail one as well. She's got a cat and I think perhaps it would be perfect as a cat's bed. Yes. It is that big... 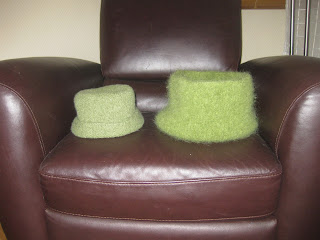 Notice how the colour is different as well as size? It IS supposed to be the same colour - moss green, but that is what different brand's color-codes are like, I guess.

I can only hope that it is the type of moss-green that my sister in law likes...