I have been stuck up at the farm all week. Runar was supposed to come back up on Monday, work a few hours chopping fire wood and then we'd all go home.

That didn't happen. His job got in the way.

Tuesday I was out of most groceries, tobacco and all dog food. Runar would come pick us up in the afternoon. I would manage on wholegrain bread and chewing tobacco until he came.

Instead Runar's parents came up with groceries+++. We couldn't ride with them home, because there is simply not enough room in their car for Georg.

Wednesday came. I had again packed and cleaned and we were ready to be picked up. This day his brother's broken down car got in the way. Georg and I went hiking in the woods in the pouring rain instead. It fit my mood perfectly.

I had a weird, scary dream that night. Probably due to my fear of being alone in a cottage far away from everybody and watching too many scary movies in my teen years about axe murderers, in combination with hearing the news on the radio, about bands of eastern European bandits molesting old people living in remote areas. Naturally I dreamed about being visited by evil axe murdering bandits and by the time I awoke wimpering in a fetal position, it had escalated to a full blown war between Georg and I and all the evilness in the universe. I was rather jumpy all morning. So much so, that Georg noticed and was rather jumpy too.

What do you know, I got visited by a ...salesman.

Just to imply just how odd that is, let me inform you that in my soon-to-be 44 years of life I have never experienced or even heard of anyone else experiencing being visited by any salesmen up on there in the mountains. There simply is no market for traveling salesmen among the mountain farmers.
1) They usually don't have the money to spare for buying anything other than the bare necessities
2) There aren't but two-three farms on the entire mountain that are inhabited all year. It is mostly cottages and summer  houses.
3) Those that do live there hate all strangers and foreign strangers with a vengeance. I'm pretty sure if they were asked, they'd put foreigners right up there along with aliens and devil spawns.

Back to Thursday. It was a nice sunny day. The doors were open. Georg was sleeping with his head on the door sill as usual and I was cross stitching a pillow case - I had ran out of yarn and finished crocheting two summer hats and had found one of my older sisters' cross stitching from decades ago, hidden in the bottom of a wardrobe. Yes, I was that desperate. I had cleaned everything, weeded everything, mowed everything, I had done all the work that I could possibly do.  Radio was on. I was humming along a happy tune. Georg and I had more or less refound our calm, the dream with axe-murdering bandits were but a pale memory, when a kind voice in broken NorwEnglish said

I don't know where he was from, other than he was clearly from the African continent. He had an honest kind face and a bright white smile.

I completely freaked out. I'm embarrassed to say. I jumped  up, cross stitching flying and I shouted

I  somehow lost the ability to speak any other words.

Then Georg stood up and I grabbed hold of him as he was acting on my freaking out, more than a visit by a stranger.

I saw the saleman's eyes widen.

"Nice...?" He said and pointed a shaky indexfinger at the dog.

I also pointed at the dog and found two new words apart from "no", which I still seemed to mumble nonstop under my breath.

The poor visibly shaken nice man only looked at me. Mouth slightly agape.

I searched my mind desperately after something to say. Something that wasn't shouting threats. something calm, nice and polite.

I have no idea what he wanted. I'm not even sure he was a salesman, other than that he carried a black suitcase often used by traveling students from 3rd world countries trying to sell their arts so that they can afford to eat while finishing their studies in this insanely expensive cold country. It could be that his car broke down and he needed help, to borrow my phone, some water...I will likely never know. He is quite likely now become 110% certain of white middle aged women's utter lack of sanity.

I walked out to the road to see if I could see him, but he must have just continued running for his life. Maybe he thought I'd let Georg kill him and then we'd eat him for supper...

I am guilty of all the horrible prejudice that I thought only belonged to my parents and their like, that I swore I would never fall victim too.

Runar did come that afternoon. We actually finished the wood chopping. This season's firewood  work for us, family and sale is done. Whee.

I admitted my horrendous meeting with the stranger. He laughed his ass off, of course.  Then he was silent for a while, having that pondering look where his brows gets all furry, before proclaiming loudly:

"I'mma make you a sawed off shotgun that I'm going to place on a secret shelf above the door. Just in case a band of axe-murdering bandits does show up when you're up here alone. I mean. Come on, Georg saving you? How? Drowning them in drool?"

I was too shocked to speak. I had a terrifying image of my crazy freaked out self with a sawed off shotgun - illegal one, made out of two old before-WW2-old semi broken shotguns armed with buckshells - going completely TEXAS up in the mountains. Not a pretty sight, I tell yah! Oy vey! 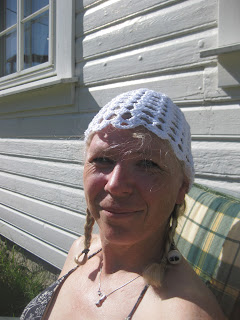 Me in one of the summer hats I crocheted. Taken before the bad dream and the embarrassing meeting with the stranger, while I was still happy-go-lucky ignorant of my dark prejudice side 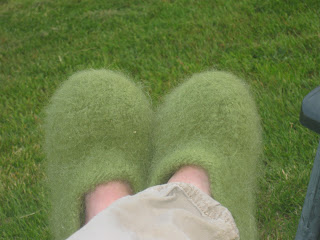 How the felted slippers turned out.

We're heading up to Vintland again today. For the weekend. We're going for an uneventful and blissfully boring weekend. Runar will be sorting out his tools, etc. I'm going to start on my secret project - knitting socks with thorn pattern. Sort of like a barbed wire thorn pattern. I have no idea how to do it, or how it'll turn out.