Big time. Not like it wasn't expected. We got the last of it painted Wednesday evening and Thursday I had to clean the house, because hubby had arranged a business meeting to take place at us. I was so worn out by the time I was done I barely knew my own name anymore. I was ready for bed at 4: 30 in the afternoon. Instead hubby persuaded me to take the dogs with me up to the farm. He would be coming in the semi-broken car, later, but late. I realized that perhaps it would be best if I removed myself and the dogs from the house, so that nothing would interrupt the meeting and agreed.

I cried most of the way up and continued to cry all evening. (When I say cry, I mean tears were running and I couldn't do shit to stop them) Marianne was absolutely crazy. After a week of having to behave and being a lot alone, while we painted, she was in a frenzy. She vented on Georg and when I took her away, she snapped, growled and tried eating me... It was not funny. It was your classical melt-down scene.

Sometime after midnight the hubby arrived and paled when he saw me.

I have known I would crash. The hectic pace since spring and especially after I got my cortisone shot and let the gang know I could now move my arm again, has been ridiculous. People getting serious ill, but only two of us know it and we aren't allowed to tell ANYBODY. The new puppy. Hubby has been rather manic, because so much has been going on in his life - changing jobs. New job heading toward bankruptcy. Starting up a new business with a colleague. All the jazz that goes with all of this.

I knew I had to have a serious chat with him, but there never seemed to be a good time. He's a bright guy, he would instinctively know when he'd step on my toes to the point of explosion and would take measures to  prevent that by either accusing me of something, throwing me off with a new crisis of some kind, hand me a new job I absolutely had to do RIGHT NOW!  You name it.

I am the worst arguer in two shoes. I can stand up for anybody else with a fierceness that scares the daylight out of most people, but I swallow camels on a daily basis to avoid confrontations with things regarding myself. Stupid! Old bible verse from my childhood jumps into my brain when I try to speak up for myself. "Let him who is without sin, throw the first stone", "Why do you see the speck that is in your brother's eye, but do not notice the log that is in your own?", etc  I know! I open my mouth to speak up and these things threatens to come out instead. WTF?!?

I sat down and wrote a letter the other week, when I realized I wouldn't be able to keep it up much longer. I got all my frustrations and all the wrongs that had been done to me the last 6 months or so, down on paper. It felt great, but I couldn't actually send it before I had done some editing. Or so I told myself.

It didn't get sent, because I didn't ever have time to sit down and read it through, edit and send it.

I gave him the un-edited version this weekend.

I do a lot better in writing, than I do speaking out loud. Those written words hit home. Yesterday he put in a new water pump in the old volvo. He also asks permission to call his work colleague, but I'll let that sarcastic stab in the gut, pass unnoticed. The main thing is that he got a wake-up-call and he admitted that most of what I wrote was true and he knew it, just...I don't know.

Hopefully he'll be a grownup for a while and help pull the load with me and not add to the load and run away. Hopefully I'll be able to write him a letter more frequently than every 5th year. 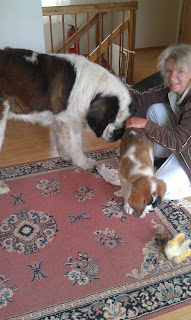 Morning bliss - yeah, I'm wearing my PJs and yes, my PJs is an old pair of karate pants. See what I use my iron board for these days in the background? We desperately need to get a stair gate...

Marianne weights about 14 kg here. That means she's gained 6 kg since we got her 4 weeks earlier... 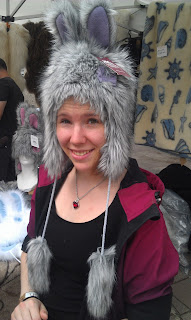 Helene fell in love with this hat. Her boyfriend immediately bought it for her. Her boyfriend spoils her rotten! She still loves bunnies, although she is no longer into hellbunnies... 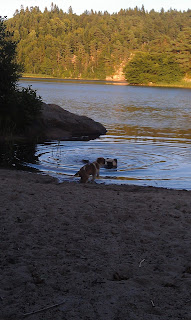 Marianne thinks Georg is nuts for bathing like this. 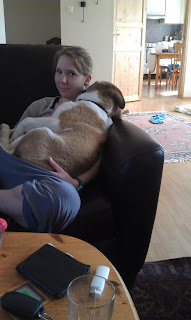 It feels sooo good to cuddle on Helene's shoulder

My poor garden suffered from lack of care, then got terrorized by a pup and finally my flowerbeds got raped by hubby's preparations for the paintjob... 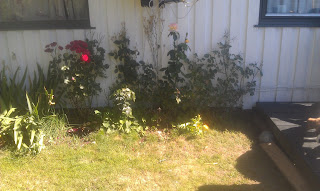 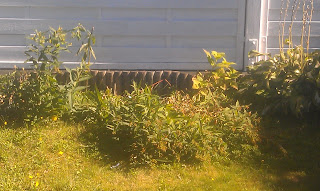 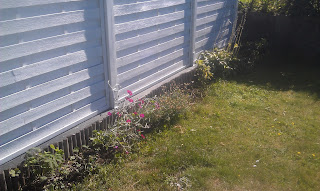 I managed to save bits of it, at least. 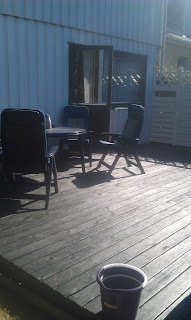 The patio(?) painted, windows and doors painted. I can at least enjoy some sunny warm days down there this fall. 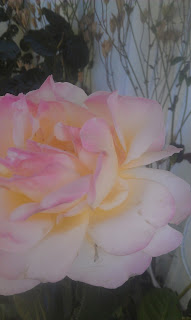 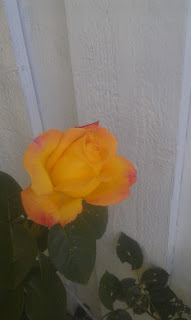 My peace rose bush did survive. The buds are yellow, then they pale as the flower blooms and they get a pale pinkish tint to them.


I haven't done any knitting, or crocheting since Marianne arrived. The few moments I'm not busy with her, I'm too pooped to do any craft. I have knitted a pair of red felted slippers. They were supposed to have been made for a lady who approached me on my blog, then mail, but when there were talk about actual money, she went silent as the grave. I'm giving them to my kid sister as a bday present, instead. They are being felted as we speak. I'll put up a picture when they're done