Hang in there, guys.

Christmas will come and even if things didn't turn out quite the way you dreamed it, it'll probably be a good one, regardless ;-)

So, how goes it with your Christmas preparations? I score a big MEH this year.

I completely and utterly failed at getting the Christmas box ready for my family in Ohio. I ended up doing the last minute panic solution, that shouldn't have happened, but did.  I promised myself last year that this year I'd start getting it ready in August, but that didn't happen. July - December this year was quite the tricky solitaire to puzzle together financially. Everything that wasn't an emergency got put on hold. Each day was a puzzle and each week needed careful planning. It took up all of the creative space in my brains. The various car emergencies didn't exactly help. Still, it's really no excuse. It's not about the money, it's about creativity and making my American mom something personal. This year I just haven't been able to pull the creative me out of hiding. Except from the knitting, I haven't made stuff this fall.

Even though I haven't finished with the gift shopping, I'm not stressed out. I can't quite decide if that is a good sign, or a really REALLY bad sign, but I'm going to pretend it's a good sign, until the opposite has been proven. Christmas will come and I know it will be a good one. There will be good food and laughs and happy family. I am not going to stress out and become grumpy just because, you know, it's not worth it!

I'm counting down days to Helene coming home. I miss her and wish I could fast forward time. On the phone the other day, she told me she had her Christmas gifts taken care of. How did I get so well organized kids?!?

Danica has a really good influence on Simen. I gave him money to buy a new pair of pants that could work for family dinners and parties that didn't involve a dress code(suit+tie) and I hinted that maybe he could get himself a nice shirt, too - half expecting him to growl at the suggestion. But whaddayaknow. He came home with a black shirt with a silver tie and a pair of dark blue jeans that DID NOT sag to the knees. I was speechless. All I could get out was a silent W.O.W. Turns out Danica had the same idea as I had and went along to help him pick something out. Apparently, she told him that he needed to look nice when she introduced him to her family. *giggles* She also gave him an intensive course in how to appropriately greet grownups. *laffs* I'm beginning to like this girl more and more!

Tomorrow, Hildegunn and I are getting my parents Christmas tree up and the house decorated for Christmas. We'll also take care of an old Christmas tradition my dad has kept since we were little kids. Comic books are big over here and each year they have a special Christmas edition. We've gotten one comic book each, together with a lollipop and candy. It's something we've all looked forward to and when the dinner and presents are finished on Christmas Eve, we sit down to relax with the candy and comic books - we swap them after we've done reading our own. This year dad told me he was getting too old and confused about who got what comic book. I made a deal with him that I would take over the baton and continue the race. It's such a feel-good tradition. It can't end.

Hildegunn will drive me up to the farm afterwards. This means I won't be able to join your chat, guys, which is sad. I love the video group chats. Mucho funn'o! I will, however, be able to greet Runar with a cosy warm cabin and a nice meal when he finishes work. He really deserves it.

That man has been busy lately. I am impressed at how well he copes with things waaaay outside his comfortzone. Last week, they attended a business meeting in Sweden and closed a really good deal with a German company that has had a Swedish company as sole agents in Norway, Sweden and Finland. Now Runar's firm will take over as agents in Norway. That deal alone will be enough to keep the company floating, plus salary to both of them.

This week he's been in Austria visiting another big company together with a client and he's already made plans for another trip down there in January.

The guy is wearing suits on a daily basis. He is traveling by plane and whatnot. It's pretty amazing. I am falling in love with my old husband all over again. Nice! 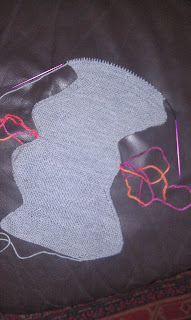 This is going to be a baby hat when it's done. Nope, I can't make heads or tails of it, either. Yet. It's a new pattern I'm trying and Ellen says the hats come out very pretty when they're done. Time will show! [in Norwish accent (tee-meh vill sjåvv)] 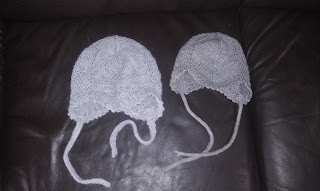 The two finished baby hats. My niece, who is studying to become a doctor, is part of a project where they try to do something about the high rate of infant deaths in Ethiopia. She'll be going down there in January and will be bringing the hats with her.


Hope you guys have a fantabulous weekend!