We had a great winter break. I spent some of it up at the farm.

My sisters' cottages are both finished. Whoohoo!

Simen "lost" his cellphone while he was on the school trip to Denmark back in January. Turns out somebody stole it and managed to call international calls for 5000 NOK (836 us dollars) before I got told what had happened and blocked the subscription. I'm going to call the phone comp tomorrow and see if we can avoid paying all of it, but I have to admit, my hopes aren't high...

I went hiking with my friend Marianne and her cocker spaniel; Nori, on Friday. Marianne got so excited that she pulled me off balance and stomped on my foot. I noticed a little pain - I mean Marianne weighs 50+ kg and when much of that weight is concentrated in one big paw kicking off on your foot, you notice it - but it really didn't bother me that much, so we went hiking for an hour.

My friend calls the trail we took "the Puma-trail" It's a good name, because it's straight up along a creek and then straight down a rocky mountain side on the other side of the mountain. It was extra difficult because of all the fallen spruce that had become victims of this year's winter storms.

After I got home, my foot still didn't really bother me much. Not until I made dinner. while I was cooking I felt this sudden pain in the foot and from there it just got worse. Too bad, really, as I had planned to go to Kristiansand ( one of the bigger cities in Norway, except that there aren't really any big cities in Norway, we just like to pretend so) to eat lunch at a proper sushi bar. I've never been to a sushi bar and according to those I know who have been, that means I haven't really eaten sushi.

Ellen promised to buy me some excellent balls of yarn for a summer dress for Frida, at a new "secret" yarn shop she found, as a special strained-foot-treat. Loffs her, we do! 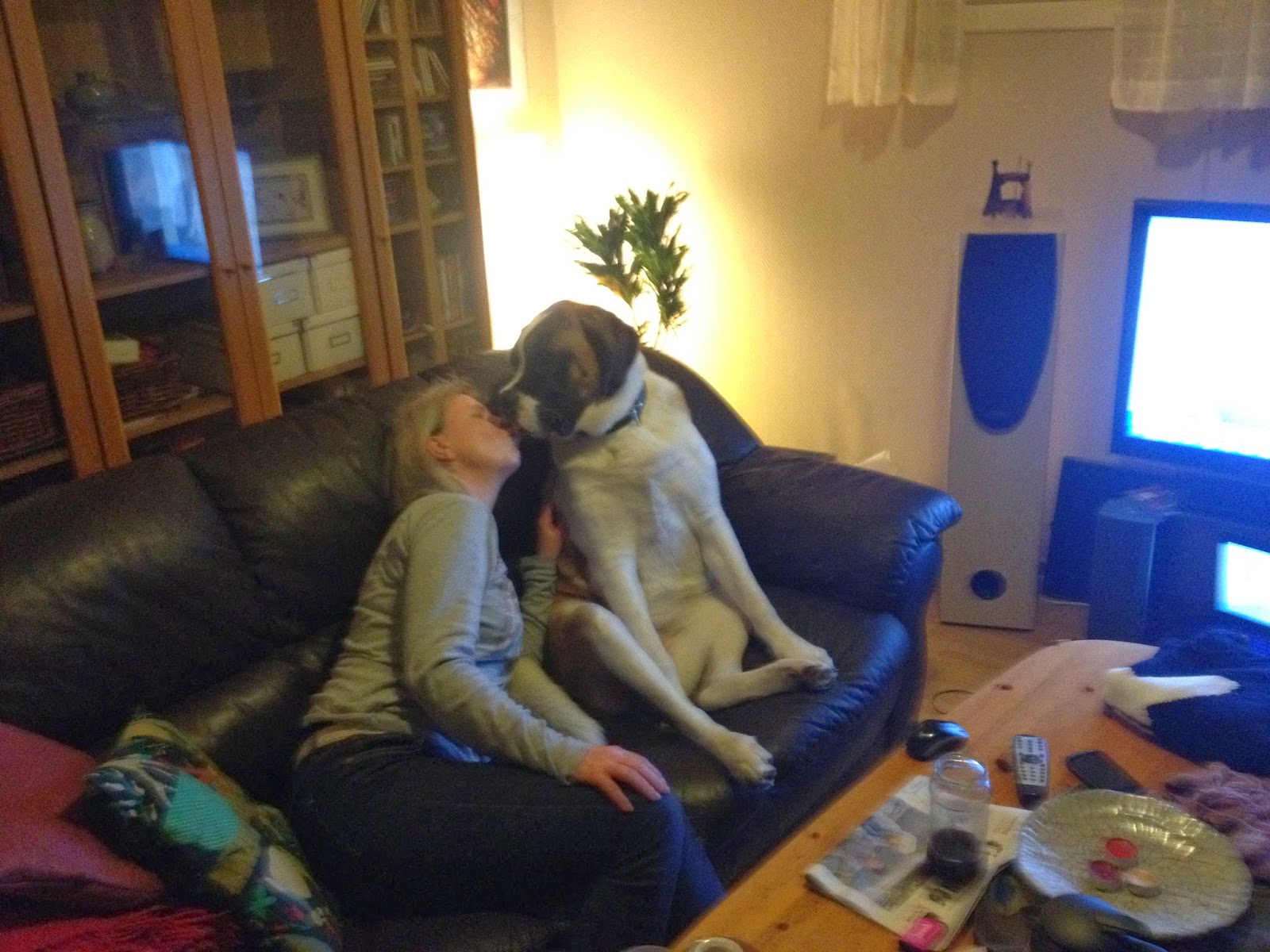 Marianne did her best to kiss it good again, so I forgave her for stomping on me.


Remember the pesky cottage neighbours up at Vintland, the ones who built their cottage way onto our property? We're meeting them in court this Tuesday. Should be interesting.  We contacted our lawyer before Christmas and he tried to get a meeting with them to settle this outside of court, but that didn't work, so he filed a case for us to make sure we met them in the court that would best suit our case. The legal system in Norway is a lot different than the American one. I can't really explain it. I'll help find links of info for those interested in the comment section.

We had two choises. "Jordskifteretten" - which is basically a court for properties and they mainly deal in maps and don't take much else into consideration. We didn't want this. Instead we're meeting in a court called "Forliksrådet" It's basically the lowest type of court. it's legally binding and official,  but it is pretty informal and there are no jurors, just a judge, the parties and their lawyers. They will however take into consideration that we have a farm and taking out lumber is a source of income and it's the only way to make some money from the farm as it is today. The area that we own, that they have "conquered" is next to a private road that is the only way to an area of the wood with trees fit for lumber industry. The plan from the days my grandfather own the farm, has been to either sell it to a contractor or buy the necessary equipment and do it ourselves. We are not willing to take the risk of somebody's cottage being ruined by leaks, or their garden being ruined from the huge machine needed for this type of work. We have been clear on this and told this to these neighbours even before they started remodelling the old little cottage, when they bought it and we heard of their plans.

From what we've heard from the other neighbours up there, these pesky pissants decided that we just said all this to be difficult and mean and that this is why they didn't need to care about it. They can't for the life of them understand why we have to be so difficult with a little piece of wood(even though it is our property and not theirs) and think that we should just give this whole area to them. For free!

Need I remind you that these pissants also thought it was their right to fish in all the lakes and hunt in all the woods up there in addition to take out as much firewood they needed for all 3! of the cottages they have bought/built up there...yeah...such lovely people.

The letter from the municipal hall in Lyngdal has already stated that what they have done is illegal and that they have to tear down and remove everything they have built on our property. We should - according to our lawyer win. We'll see. I take nothing for granted at this point. At least our insurance cover most of the expenses. I think there is a set fee we have to cover ourselves, but it won't ruin us - lawyers and court cases are insanely expensive.

Runar is at a meeting today. Two investors have been invited and has accepted to join the firm. Runar and the two other investors will each own 30% and the young partner who couldn't afford to continue owning a business of any kind, will be given 10% as a token of sorts. Runar will be the manager while the young partner will go back to being an employee only (salesman).

We'll be taking up a loan and Runar and the two investors will put in money enough to end all of the financial difficulties they've had. It will enable them to invest in all the equipment needed and they will be able to have a stock. In other words, they'll be able to sell a lot more and a lot faster.

The firm will continue as it is today, but they will be manufactoring a type of sifters(?) for industrial use, basically for big mean mo-fo crushers.  link to their company: KSTEK AS It's all in Norwegian, but there are pictures of what type of machines they're dealing in.

For me it means that Runar is happy and easy-going and we'll be getting a regular paycheck at a set date each month. Whoohoo!