Project; fixing up at the farm

We've gotten a good start fixing up at the farm. The cellar is DRY! Which means I can actually store things down there.

Runar is going to put in a water tap and I'll get a new hose. Now I have to use the indoor tap and have the hose running through the house, which is a bother, or I can carry buckets of water, which is heavy and a bother. We'll be storing garden stuff and furniture down there. Now we store those things in the barn and they get covered in goo and bird droppings...yuck! 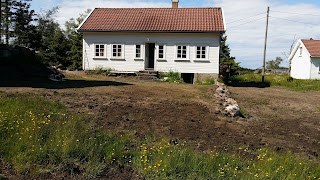 The lawn is semi finished. Runar has put up a natural stone "wall" to enable a flat lawn in front of the house. We'll be planting red currant bushes, etc along it on the lower level and a hedge on top of the stones to shield against wind gusts. Also to enjoy sitting out there without staring the neighbours straight in the eye.

We're planning a masonry natural stone wall up against the barn as well. (to the left of photo, where Marianne is dosing in the shade) We'll have to wait until next year, to let the grass grow properly before driving on it with heavy machinery. Runar is contemplating putting in a natural stone bench - which he saw at some friends' house a few weeks ago. It was gorgeous looking! The reason we need a stone wall there, is to prevent the whole barn from gliding out.

Next weekend we're putting up stones and filling in dirt for a flowerbed from the steps along the house to the driveway. I'm going to see if I can get roses to grow up there. Because of the lower temps up there, not all flowers thrive. 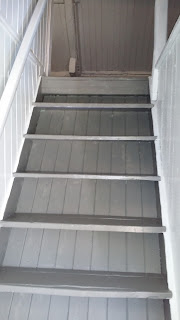 We've finished with painting the upstairs hallway and stairway. The difference is huge and amazing. The 150+ old logs were old and blackened. The whole hallway was dark and scary. As you can see on the photos, they didn't use nails, they notched the logs and they insulated with EVERYTHING, like old newspapers, moss, sawdust, you-name-it. The 100+years old dry moss is hell to paint on. I vacuumed countless times, but we still had a hard time putting on paint on those old logs. The floor was easy in comparison.

The other thing you'll notice, is that they used whatever planks and logs they had available. This cottage was built by folks who mainly got by without much real money. They bartered and swapped goods for favors, etc. There is a wonderful story about the former owner. I'll tell you another time. 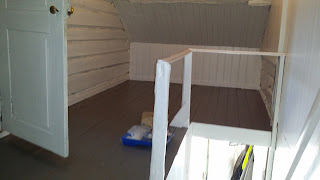 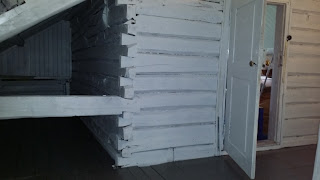 Thomas and I had quite a job using wood impregnation with antiparacitics to get rid of the common furniture beetle that has been eating away on the house up there. It took a couple of weeks to finished the treatment, as we had to do a few parts twice before it helped. But, knock-on-wood I haven't spotted the fine sawdust anywhere afterwards. w00t!
(the photos are from before the second coat of paint)


Healthwise I kept it up until this week. The new meds arcoxia my doc has me trying out works wonders, but I can't take them for more than 4 days max. Neither can I use the ordinary anti-inflammatory meds Vimovo, while using the Arcoxia.  My arms and neck are killing me this week, so we're taking it easy. Right now I'm even having trouble lifting my cup of coffee without grimacing and it's so hard not getting low. Ugh! 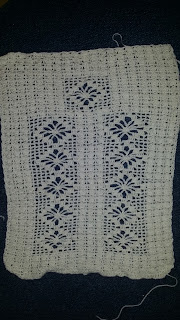 No jobs for Runar, yet. The oil industry is starting to suffer and there is such an increase in unemployed people. With a decrease in available jobs, things are rough. 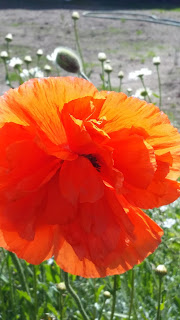 I'm on the last arm on the jacket I'm crocheting for Helene. It was supposed to be for myself, but I've sort of outgrown it... Here's a photo of the back, just to give you an idea of the pattern. I told you about it earlier. There were no pattern available anywhere for the kind of jacket I wanted, so I used the pattern for a wedding-dress bolero and just "invented" the rest of the pattern on the go


Oh, I proudly present....poppies!!! I dug up a poppie plant last year, from my garden here in Mandal and brought it up to the farm, just to see if it would grow. It did. 3 flowers happened this year. Who knows what'll happen next year