Things have been crazy busy over here.It's been an insane week.

I wish I did a better job of just saying; 'No'.

A year ago, I got a call from a friend asking me if I would please agree to be the secretary on the board of the local Humanist Association. This man was the one in charge of the humanist confirmation my kids both attended and he's also a former teacher colleague of mine. I said 'No!' right away, but he kept nagging and sure enough I was persuaded to sit on the darned board as long as I wouldn't have to do anything other than write stuff down and email it.

That lasted until November, when I stupidly agreed to be in charge of the decoration-making at our annual solstice get-together workshop day. (Basically it is making Christmas decorations on a non-religious basis.) I didn't know I would have a very sick puppy to take care of, back then.

As this is a tradition that has gone on for years, I naturally thought they had a storage of needed stuff and a routine for how they did it all. I was wrong... It involved A LOT of work and preparation, finding, ordering, collecting and paying for all the material in advance. I also had to sit down and practice, as I had forgotten how to make santas, chess-board patterned baskets and whatnot. Thursday night I had a minor anxiety attack. I haven't been in charge of any big events or organized things involving many people that's not family for 10 years. I was terrified. I was seriously contemplating running away, starting a new life as a hippie on Grenada.

The workshop was Saturday and it all went quite well, but it cost me a few years of my life, I'm sure!

That killer cold flu that knocked hubby out a couple of weeks ago, finally got the better of me, early this week. It was a killer, alright, but I didn't have time to be sick. I drank Lem-sip Max, bunkered up on tissue-paper and pretended I wasn't really sick...yeah, it didn't quite work.

And then our car broke down. And it won't start. He put it at a garage, but it's none of the 'usual' things that is wrong with it and we don't know if it will ever start again. He took it home from the garage, as we can't really afford to take the chance that the mechanics get it right and manages to fix it when it's a 50/50 chance of epic fail.  Hubby has been borrowing his dad's and his brother's car - they're the best family possible.

We need a new car. Why do these things always happen at THE worst times?!?

He's going to look at a used Merc. E-type(apparently these are the huge kind with room for dogs in the back) tonight. If he decides to buy it, it means good bye to all our savings =( We can't really afford a car loan, so we're buying used. We were planning on using the savings for hubby's new business plans, but....life and it's little surprises, eh?!?

If he manages to figure out what's wrong with the Volvo himself, we can sell it and get some of the money back, but he has no way of measuring or testing the electronics, so it'll be a measured risk of changing parts and see if that takes care of it. I'm not so sure about this, parts cost money and if he doesn't 'strike gold' the first few times, the cost will be more than the car is worth. He might as well sell the car off in parts...time will show!

This also means that I have to take care of all the Christmas shopping myself., again. I wonder how many years we've been on this particular dance. Hubby: "Oh, no, don't sweat about the gift-shopping, I'll help you with that, it'll be fun and easy." Riiight!  Without any car. ...I will have to find gifts that are small and weightless....and doesn't cost much.


My fingers have swollen, my right arm and shoulder are acting up bad and my neck is killing me.  Wrestling with an 80kg pup is fun, but hells bells it takes it's toll on an old body:P

There are some good stuff that have happened in between all the madness. George has gotten better. We've been taking walks for the last 3 days. He still limps, he has a swollen ball on his one elbow(?), but he's now happy and gets bored and restless, which is a good sign all considered.

He has worked his charm on our 4-legged ole Lady and yesterday he won her over completely. They were such a sight. Laika, even though not hostile, has been skeptic to this huge fur-ball suddenly invading her quiet life. Her arthritis makes her stiff and sore and also she's starting to lose her eye sight. Georg, however figured out a way to persuade her to play with him. he got down on his belly and crawled over to her, nudging her with his snout making soft whimpering puppy sounds until she gave in. Soon after they were both goofing around, tails wagging, happy-growling and generally acting like crazies. 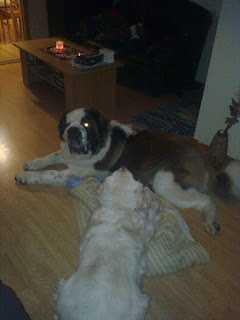 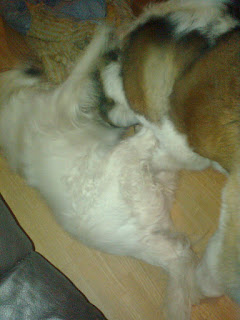 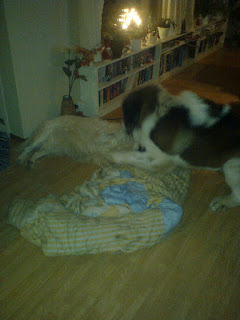 Tomorrow Georg's appointment with the Vet is due. He'll be having an X-Ray too. The former owner is picking us up tomorrow morning. Keep your fingers crossed.