I've been stung twice! this weekend. The first one was a wasp-like little winged bugger. Got stung while mowing the lawn, so that wasn't really a surprise and I'm not allergic, so after the burning stinging feeling went away, I was fine. The other one, I have no idea what it was - a bit swollen, but doesn't itch *shrugs*

Anyways. Pictures of Lotta as promised


As you can see it was pouring down while we were hiking, but the dogs didn't mind and we didn't really care either. It was too much fun watching the dogs play and show off to each other. Georg pretended to be a sea-monster rising up from the deep. Lotta was VERY impressed  and peed on  herself just a little, every time :P

I picked red currants this weekend. Even though I put on protective nets to keep the winged berry-thieves at bay, they outsmarted me this summer as well, just as they did the two previous ones.

I did get one bucket, so at least there will be red currant jello/jam for the family. We use it both on bread and with dinner dishes, like you use apple sauce.


Last evening, we took the boat for a ride. Then Runar decided it was time to do something about my fear of the sea and boats.... 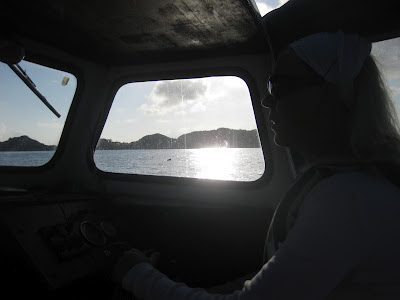 I know you can't really see, but I am having a very real silent panic attack, here! Seriously! He had to wrestle my fingers off the steering wheel, so hard was I gripping it. And while I'm hyper ventilating, Runar is working at NOT calming me down by explaining to me that driving a boat is like driving a car, with a football field as a road and that should I crash, we'll be saved as there are many boats out and someone is bound to see us and that I have a safety vest - I get teased to no end about my desperate belief in wearing safety vest even if the boat is still at the dock - and that the sea is pleasantly warm this time of year,  blah, blah, blah. I DON'T CARE!

All I feel like doing when he's 'helping' me with my fobias, is to kill him dead! Twice over!

But then I remember this 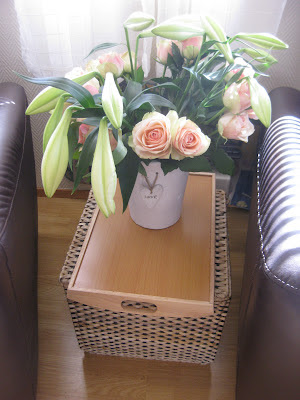