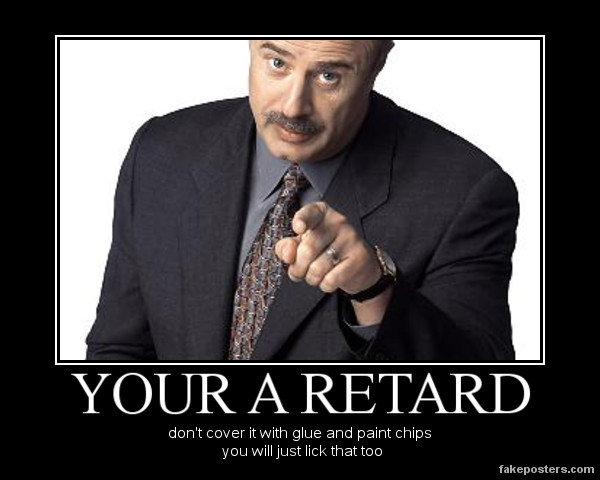 I watched an episode of Dr Phil today. I knooow, when you sink to the level of watching daytime TV, things are bad. I've been through a bout of bad arthritis. My back has been aching nonstop for about a week, where the right shoulder just locks up every now and then. My mood has been murderous, to say the least, which is why I haven't blogged. Self-censoring is mandatory when I'm going through a period of aching. I become bitchy and angry, my patience is non-existent and even a good ole southern Norwegian "Åååhhrr!" (equivalent of '"Oh!) is said with so much feeling, I am THIS close to getting acid burns on my lips. I kid you not.

Anywho, I watched this show today about some women's addiction to food. Dr Phil told one of them that she used her hubby as an excuse not to mind what she ate and that eating when nobody saw, indicated she lacked integrity on a personal level.

I've realized that I am lacking in the personal integrity department. I am not up to par when it comes to my addictions. I am still struggling like hell with quitting smoking and so far I have only managed to cut down.

I've said it before, I think, addiction to food and addiction to nicotine must be somewhat similar. I guess any addiction is just as ugly and just as difficult to quit.

Runar has bought one of these monstrosities from one of his co-workers, along with two types of fruit tobacco that supposedly are nicotine free. One apple and one grape. They taste and smell nice enough, but the thought of us sitting in the living room puffing on one of these, just doesn't feel right to me.

There are the strong prejudice thoughts that only dopefiends use this, of course, but it's also a case of finding it just so friggin' tacky. I mean, it's a functional proper pipe and it works quite well, but...I don't know, it's just not very ladylike to be sitting puffing on one, now, is it?

Runar says that if we mix ordinary tobacco with the apple/grape mix, it can serve as a weaning off nicotine treatment. It can be our "carrot". If we don't smoke all day, we can share a waterpipe after nine, when we're sure we won't get any visitors. It might work and I will give it a try.

I believe I have to quit smoking alone, meaning I think I have to take the lead and show Runar it can be done. I know that his competitive nature won't be able to handle me quitting, while he is having to admit defeat.

There has been a change of plans with his old job. His notice-period(?) has been cut in half, because they found a replacement quickly and the other boss-lady has agreed to stay on and do the training. This enables Runar to start in the new job in a week, instead of May 1st. Even though his goal was to have quit smoking before starting in the new job, he is waaay too excited and stressed out about it to be able to cut cold turkey.

Why can't you buy willpower and self discipline on bottles?!? 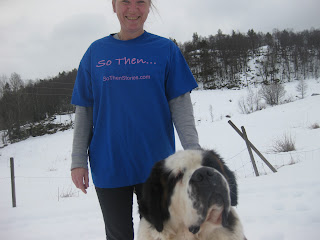 I've been reading some new blogs lately. Among others I've read and lauged out loud by the stories this lady writes So Then... Stories and after subscribing and commenting, I received an email asking if she could put my name on her site, since I was her first Norwegian subscriber. She then asked me for my address so she could send me a T-Shirt and a button. I got the T-Shirt the other day and in the letter I was requested to take a photo. So here it is  Georg and I - in my So Then... Stories T-shirt up at Vintland in the snow. I wear wool long sleeved jumper underneath as it was minus 10 C. Georg is on it, because, c'mon, it's Georg. Simen is the photographer and as you see, he is more concerned about getting Georg's face in the photo, than mine. Totally understandable :P 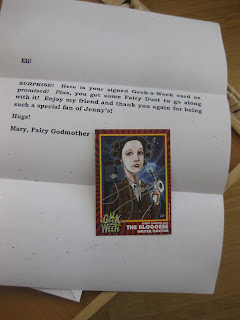 Yesterday I found another letter in the mailbox. From SuperMary (Jenny's fairy Godmother) and TheBloggess telling me I had won a signed Geek-a-Week card.  The letter was also full of fairy dust glitter. Since I opened it sitting by the kitchen table, that means we'll be eating fairy glitter for quite some while, as I was unaware and typically ripped the envelope open and spread that glitter über des allez (This is Cara-German for everywhere). I'm gonna believe it gives me superpowers and will help me quit smoking!

I also realize that I have to pay attention to what I comment on and where I comment. I'm a bit too old to be die-hard fan of celebrities, no? Note to self: GROW UP CARA!

After reading Court's blog, I also realize I need to work on getting a better filing system for important papers. Plastic bags in wardrobes and in cardboard boxes in the attic, isn't very smart and neither is it fireproof. Gulp... It's on my list

I've become addicted to audiobooks. For me, ordering them off http://www.audible.com/ is about half the price than ordering paperbacks from Amazon and it is less than 1/3 of what I have to pay for books in bookstores, over here. To put it in perspective; an audiobook costs me half a packet of cigarettes...yeah...mindblowing, huh?!? I still  have to limit myself to one book a month. I'm afraid I'll go completely nuts, if not. When it comes to books, I'm hopelessly helpless.

Ooooh, as you may know, I'm a fan of Amanda F Palmer. On her blog she wrote about her mentor and friend who had cancer http://www.amandapalmer.net/blog/20121106/ and I in a bout of impulsiveness (it's me, after all), wrote Amanda's peeps and asked if I could knit him a pair of socs and if he wanted a pair, what size, colour, etc. What do you know, they got back to me and Anthony got back to me.  I ordered his book Lunatic Heroes waaay back and it finally arrived in my mailbox two days ago! Whee! If you have the money to spare and feel like helping out a truly nice guy, go buy it!  I'll be writing a review of it when I've read it, because I promised to do so.