This week started somewhat poorly but all in all it's been one of the better weeks for months.

Last Thursday my mom was rushed to hospital. She had a fit. She lost her balance on her way to the dinner table, sat down and proceeded to shovel food into her mouth and then kept asking my father when they were going to the Christmas dinner party for work. He called my sister, who's a nurse, who immediately called an ambulance. By the time the medical personnel came, she was back to normal, but didn't remember anything of what had happened the last few hours. At the hospital checks were done, but nothing showed. They suspect a minor stroke, or blood clot in her brain. She was released and came home from hospital the next day and all is well now.

According to my sister, she told the doctors at the hospital that the reason for the blood clot was because she had been so stressed out with all the work of preparing and packing of the moose meat... I was there the day before and cut, minced, packed and divided the meat with my dad. Mom was snoring on the sofa most of the time, but she did ask if she could help by the end and she did dry some of the bowls and knives we had used that I had washed. We thanked her profusely and she was very proud of having helped. I am no longer allowed to visit more than short periods and under no circumstances stress her out...   Gosh I'm such a troublesome daughter![/end sarcasm]


Monday morning started with a close encounter with a rocking chair. Result; a smashed toe and the loss of a nail. Well, the nail is still on, partially, it's just blue. And there is leakage. Gross! And Pain! I guess the fact that I had to force the foot into a boot and spend all day walking on it, didn't help much, but it did grant me the next two days where I couldn't do much other than knit. A lot. Whee!

I've been knitting woolen baby hats for a project I was asked to help my niece with. They're sending a load of hats down to Ethiopia. I've finished two and if there is time, I'll be doing one or two more. I'm beginning to really enjoy knitting baby clothes. They're so quickly finished and I'm learning new stuff and new techniques. F.U.N.

Tuesday Simen had Occupational-Booth-Day at school, which meant he had to attend school from 3 - 7 pm (his stand won, by the way and he got his picture in the local newspaper) and had the opportunity to chauffeur his old mom around all day, or that is, he drove me up to see Brit(MIL) and she gave me most of her button-collection, because she knew I was going over to my friend, Ellen's that evening and she thought perhaps we could make use of some of the buttons for the things we were knitting. Ellen was ecstatic and we both agreed that I have one helluva MIL. Ellen is drowning in work, btw. She has her own net shop that her oldest daughter is managing and she's been taking orders like crazy -  that are to be finished and sent out before Christmas - because she's quit smoking and is majorly p'ed off, Ellen says, but that is just Ellen talking cause she's p'ed off with the work and her daughter's lousy mood. here's a link to her page. Her work is amazing. She's made up half of the recipes herself. The name Mormor og Mia translates to Granny and Mia (her granddaughter's name)

Runar's new firm is doing quite alright, but even if they are selling goods and making money, they are still in phase one of the whole business-starting-cycle and there hasn't been enough money for paying wages, yet. That means we are now down to zero, financially. Suckage! Runar has assured me there will be enough for half a months wages by next week, so that we can pay our mortgage and the rest of the month's wages will be paid the week after, so that we can afford to celebrate Christmas.

Update:
forgot link to site - only in Norwegian yet, but you can see what machines++ they're dealing with Kstek.no

Marianne is doing great. She's getting so big. 40 kg here's an "action picture" of Runar and her - I love Google for this -  and a few of Simen and her. How Marianne greets the boys when they get home. 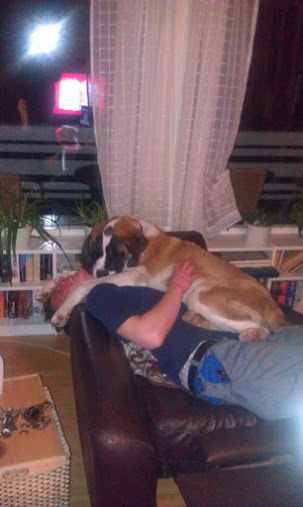 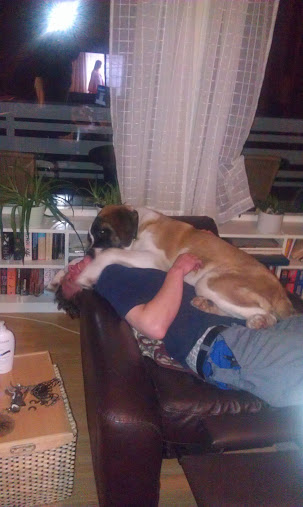 And she loves Simen just as much. This is what normally happens when he gets home from work in the evenings after having been gone since early morning. 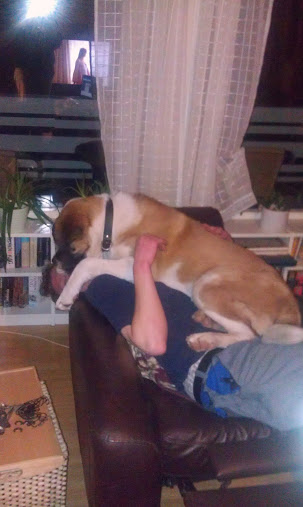 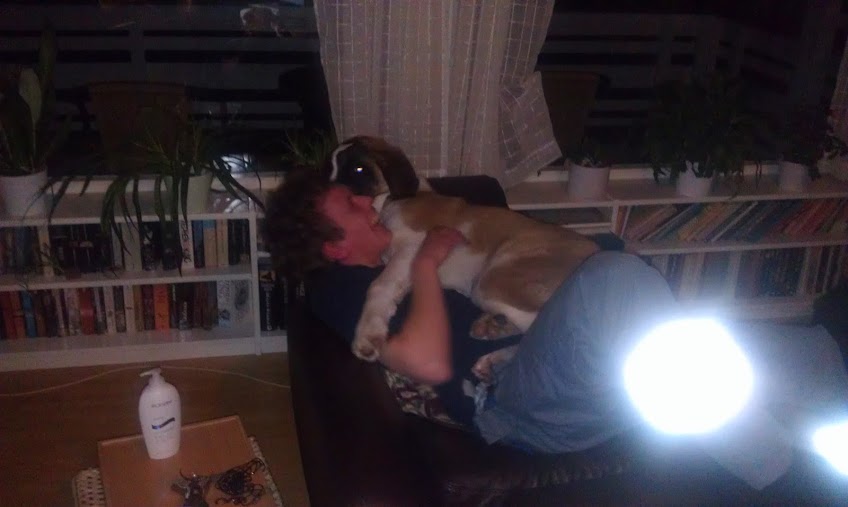 PS!
Best news of the week: HELENE AND BOYFRIEND WILL BE COMING HOME FOR CHRISTMAS!!! They won't stay for long, only from 23rd to 25th, but it doesn't matter, because they'll be spending Christmas Eve with us and that makes me ridiculously happy! ^__^

PPS!
Oh, note to Helene's friend, Maria. I will send you your scarf today. Promise!