Tick season has started over here. I need to get some anti-tick drops for Marianne (They don't make tick collars for St Bernards - at least my vet don't have any) I also need to get an appointment for X-rays and the 1-year-old check up for her. She'll be 1 year May 21st. w00t!

Marianne has been inventive() this week(read: Runar forgot to watch her) She managed to persuade Runar(read: she looked up at Runar and waggled her tail happily as normal dogs do) to take her to work with him. He had a meeting at his partners' shop and guess what she found? A whole mound of finely ground graphite - you know, the stuff pensils are made of  - and she gave herself a graphite bath.

Runar called home and warned me and told me to rig up the hose to give her a bath on the patio, because the black dust monster wasn't safe near anyone, or anything. Only thing is that the extra piece needed to hook the hose to our shower, had disappeared during winter(read: I'm afraid I threw it in the garbage during one of my frantic cleaning-out-the-damned-shed modes). It was either ice-cold water from the outdoor tap, or we'd have to get her into the shower. We chose the shower, because it's still cold enough that an outdoor shower in cold water would probably give her a serious cold. She's fine swimming in the lake, or sea, because her fur is such that it insulates from water getting all the way down to her skin, but as soon as you add soap/shampoo, that protection vanishes and they get wet and cold as us furless two-legged beings.

We barely got her into the shower. Runar pulled and I pushed and then forced the shower door closed. I had to hold the door closed during the entire shower ordeal, because Marianne tried to gnaw her way out. 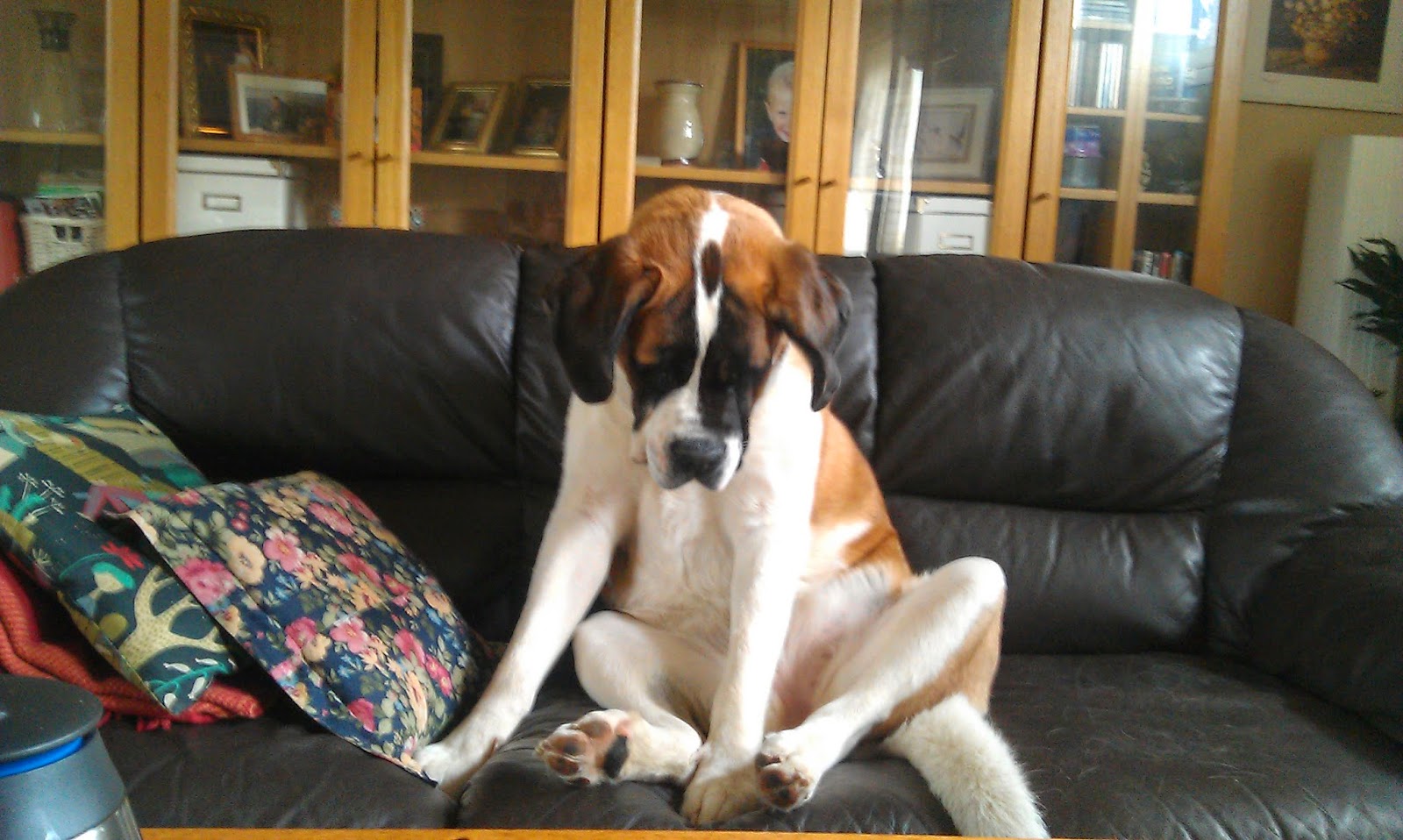 
The shower got more than half of the graphite dust off her, but not all, so Runar volunteered(read: I was thiis |~| close to strangle the man to death) to take her down to the lake and get her to take a long swim. It didn't really help, but it gave me time enough to clean the dust off everything she touched on her way to the shower and to cool down a bit, so as not to stand ready with a cleaver when man got back. I don't think it did much good with the swim. She still has grey-ish spots here and there and it's been 2 days, 1 shower and 3 baths since she dove into the mound. At least it doesn't smear off onto everything else, anymore.

Helene ended up in the ER, yesterday. They suspected appendicitis and kept her over night, but her CRP levels was much better today and the pain was almost gone as well, so they let her home today. She got a note giving her immediate access to a hospital bed if she gets worse during the first 24 hours.

Runar has a minor repair job to do in Stavanger tomorrow, so I'm hitching a ride with him and will spend the day with her. I just have to see with my own eyes, that she looks okay.

(yes, I admit I'm as hysterical as any other mom when it comes down to these things). I embarrassed the heck out of her. She gave me a text saying she was on her way to the hospital and that it was possible it was appendicitis, but that I couldn't call as she was out of power on her cell. Of course I called the hospital and got them to track her down and give her a hospital phone so I could talk to her. Duh! It's what moms do under such circumstances. Actually I was ready to steal a car and start driving, but Runar managed to persuade me otherwise.

It's funny, I've never viewed myself as a hysterical mom, but when things like this happens, the infamous mother-monster in me wakes up and roars. Loudly.

Messages like "I'm quite fine, you don't need to come". translates into "Oh, my god, I'm dying, you have to come. Right now!"  It's the same with messages like "I didn't do anything wrong, but..." They translates into "I've committed a terrible crime and will be locked up in prison for life" (When Simen calls and begins his sentences like this while out doing his russe shenanigans and has run out of money and needs help to get home.) I automatically interrupt him mid sentence and  half yell, "WHAT HAVE YOU DONE, NOW?!?"


Also, I have sadly reached the point where I have to start dieting. *pout* Damn 40+ Things really starts going downhill fast after 40. My mind tells me I'm still quick and flexible. My body shouts otherwise. And fuck! Kilos shows up in thin air and clings to my body for life. I expect to gain weight during the worst of the winter months, because I  take shorter and fewer walks and no hikes in the wood. I've done that every winter the last few years, but earlier, those extra kilos have vanished quickly enough when spring comes and I start hiking again. Not this year. *pout*

Okay, I still don't do dieting for realz, because my dieting consists of eating whole grain breads of various kinds and no chocolate or candy snacking. I still have a ton of butter on those whole grain thingies and I still eat normal dinners as always. Meh.

I have plans on starting doing yoga, but I still haven't found a youtube yoga session that I like. It's probably more a case of me  just not knowing what to look for. Halp, plz?

Uhm...it doesn't really give us any extra money to use on fun stuff, to be honest. We're in the minus after a winter of little, to no paycheck, so what it means is that we get to keep both our house and Vintland and escape bankruptcy. We are fit to keep on hanging in there.   HIPfuckingHURRAY!

I'm desperately trying to de-frost my freezer. I've got one of those combi fridge/freezer thingies. It is supposed to! be of the type that does these things automatically. After enough years and after enough incidents of forgetting to shut the door properly, the automatic-get-rid-of-excess-ice function, doesn't function. Ice was threatening to take over the whole thing.

I have a regular old fashion freezer too, so I moved all of the frozen wares into that and let the door open yesterday morning. The idiotic thing with these fancy automatic thawing wonder machines, is that when you actually have to do it manually, there is no way of turning off the power  for the freezer only. Options are spoiled food in the fridge, or thawing out the ice by leaving the freezer door open.

After 24 hours of open door thawing, the ice has been reduced by NOTHING!


Naturally, I've now done what is said you should not do. Ever. I've put a heating fan right outside the freezer door and it is working excellently. So there!
At least it hasn't started any fires...yet.  Patience issues much?!?

Since it's almost Friday I wish you a fantabulous weekend, guys!